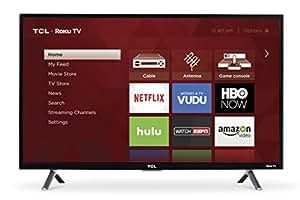 May 31, 2017
Size: 43-Inch|Configuration: TV Only|Verified Purchase
Well, this certainly started out as a 5-star TV. Great price, and our family is a big fan of Roku boxes, having owned two already. Setup was easy and the picture was surprisingly good! All in all, I was very pleased.

Until about a week in, I look up while my son is watching a show and there’s a vertical line of dead, blue pixels about 7″ long running through the middle of the screen, about 5″ from the left side. I was hoping it was just a streaming issue with his show, but nope- it was the screen. Really disappointed as a return of a 43″ TV, even if they foot the bill (and they should), is going to be a pain.

I was hesitant to buy what I consider to be an off-brand, and now I’m wishing I had followed my gut and bought an LG or Samsung. In all fairness to TCL, minus the vertical line it’s a really nice TV, and I will update my review accordingly when I hear back from their warranty/service department.

UPDATE: TCL tried to pawn the warranty return off on Amazon after I had already started the process with TCL. I told them to stay the course of getting this TV repaired or replaced, and two weeks after the last conversation, NOTHING. Zero communication from TCL. I’m going to give them a couple of more days and then start the process with Amazon to get this replaced. What a hassle. If they turn a corner and make this right I will update this review but as of now I HIGHLY recommend you consider another brand of TV given the quality of this set and, more importantly, the lack of good customer service from TCL.

UPDATE #2: I finally emailed TCL at another address and, to their credit, a US-based rep (Larry) showed some interest in making this right. He shipped me a replacement unit and said I could ship the original/defective unit back.

After setting up the SECOND unit (wall-mount), updating the software, etc., sat down to watch a movie…more dead pixels. Yep. On the replacement unit, in approximately the same location, there were two lines of dead pixels not unlike the first unit. So again I emailed Larry, and we agreed at this point TCL would just take both units back (on their dime) and refund me my full purchase price. Which they did, and very promptly at that.

Before anyone accuses me of sour grapes, TCL-bashing, blah blah blah: Listen, it’s a NICE TV! I really wanted to like it! I ended up getting an LG and frankly I like the user interface better on the TCL. But to send me two similarly defective units? Something is horribly wrong with their quality control. Also in fairness to them, their customer service really picked up when Larry got involved (out of CA, I believe). So if you have the time and patience to navigate a return if something goes wrong, I say go for it. It’s a nice TV for the price. I just don’t have the time to be messing around with returning multiple televisions.

April 30, 2017
Size: 32-Inch|Configuration: TV Only|Verified Purchase
OK, so right off the bat I will say “WOW”. For about $170, I was not expecting a lot of bells and whistles, which is fine for a newly converted “exercise room”. Upon delivery I was amazed at how light this TV was. While mounting on an articulating arm mount, I actually held it in place with one hand while I screwed it into the mounts. I was fearing it to be a “toy” quality because of it’s light weight, but once I turned it on, I was pleasantly surprised. The colors are great, it is rich in features and has some very intuitive interface design qualities.
— It’s a smart TV, and happily the features work great. It connected to my WiFi with no problems and the connection is strong (meaning the internal adapter is well made). Previously I’ve had issues with Vizio TV’s connecting, so this was a great relief. The integrated Roku works flawlessly and the set up was easy and intuitive. It quickly walked me though my Roku, Hulu, Amazon and other accounts.
Since this TV is in a room not served by cable or satellite, I connected it to a very handy Winegard FL-55YR FlatWave Indoor Antenna and VIOLA! I had 40 channels of OTA TV to augment my Roku.
The remote is small and is just like a normal Roku remote with the addition of channel and volume controls plus a handy mute button. And as a fantastic BONUS – by adding a thumb drive to the TV’s rear USB port, you can pause live TV for up to 90 minutes. That was totally unexpected and a really nice surprise. (NOTE- they suggest a 16GB drive or less. Anything more won’t extend the 90 minutes and would be wasted space).
Bottom line: Great little TV, lots of features; great interface, Smart TV that works — and it has an earphone jack if you need it.
July 17, 2017
Size: 32-Inch|Configuration: TV Only|Verified Purchase
May 15, 2017
Size: 43-Inch|Configuration: TV Only|Verified Purchase
Bought for my Girlfriend, picture is great and love the base. much more stable that the usual single stick in the middle, just be sure your table is wide enough to fit it. Like that the cable box fits perfectly underneath it. Two cons though: it has no external switches for off/on/menu so if you loose the remote control, you are so boned. You can’t turn even turn it off or on. Second, my GF does not like the small remote control. I don’t see it as an issue, but she does. Those are my only issues though. Other than that, picture is great, sound is great, Roku features work great as well and price was super attractive.

Note: Added photo of the switches for comments below. Were a bit hard to find.