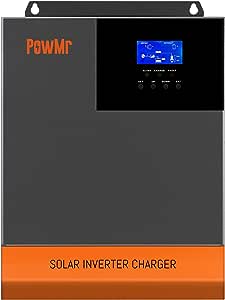 Reviewed in the United States on August 2, 2021


I was looking for an inverter that could output 3KW that could manage power from grid, 24V battery bank, and solar panels simultaneously with priorities set by user. I could not find a reputable low-frequency inverter that would do what I need. This one comes close, but it is a high-frequency type. At $500, I decided to give it a try. I have had bad experience with high-frequency inverter. It has trouble with starting a heavy load without shutting down the system, blowing fuses, or blowing up the weakest FET as they put many of them in parallel. The low-frequency design uses big iron core to store energy, 1/2 LI^2, to take cares of peak load demand.

My setup uses 2 Simpliphi 24V 3.8KW-HR, 1500W of PV, and steady grid connection. The circuit is for a separated circuit in the house intended as a UPS with loads varying from 250W to 650W. A house 120V circuit is set to be powered via this inverter. During the day, it charges the battery from solar, while outputting 120VAC to the house. At night, it uses energy from the battery until discharging to about 30%, then automatically switches to the grid power. Battery will be on the next day. It has been working OK for a couple of weeks with a net gain of about 10KWH per day. The heaviest load I tried was a 1500W microwave oven, it started just fine, the fan kicked to the highest speed in just under a minute. The air came out is quite worm.

My comments/concerns:
– The unit does not have temperature control for charging, LiFePO4 cannot be charged at below 0C
– Operation is dependent on 2 fans, running all the time, variable speeds, quite loud
– Operating manual is in Chinese-English, needs some level imagination to understand
– The fans move air from the top of the unit to the bottom, which is counter intuitive from
thermodynamics standpoint.
-The WiFi Dongle is useless for me. It won’t serve as a remote for the control panel. The apps wants me to give up my personal info the app owner in China, just to do the data logging.
– There are several settings for operating condition warning. However, these warnings are called “fault” showing as flashing error red LED on the control panel. This could cause concerns for user over the health of system while it is working OK. The buzzer warning could be turned off by users, but not the “fault” LED.

I am interested in seeing how this unit was designed and how it performs beyond the casual look. I wish I had an extra unit to evaluate the performance down to the details to be able to have peace in mind regarding its reliability. After all, this $600 inverter/charger is connected to my $6,000 battery bank. It would be a disaster if the charger would fail and put excessive voltage on the batteries.

3 stars for now, pending on more observations over a longer period of time.