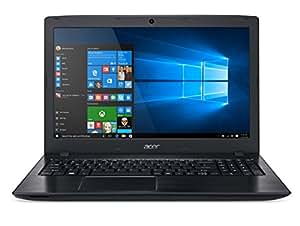 The E 15 is a fast computer with plenty of ports and great battery life, but the washed out screen holds it back.

With a bevy of ports including VGA and a DVD drive, plus its heavy weight, the E 15 screams “work computer!” This isn’t a bad thing, because it also feels substantial, including the monitor hinge. Many laptops in this price range feel like they need to be babied to survive long. There is a physical Ethernet port, an HDMI port, three USB 3.0 ports, and up to date 802.11ac WiFi. One nice touch is that the matte plastic has that brushed look, giving it a bit more traction and style. More importantly, and unlike many modern laptops, it is easy to service or upgrade.

The 8th gen Core i3 2.2 Ghz CPU and 6 GB memory combine to give swift performance for most common tasks like word processing, web browsing in many tabs, and streaming video. One shocking thing to me is how well it handled running its own 1080p screen, a second 1080p screen over USB 3.0, and a third 2560×1440 screen all at once without issue. I was running multiple HD video streams and web browsing at the time on different screens. My previous laptop that cost much more and had a dedicated GPU dropped a lot of frames in this configuration.

I only notice the weaker CPU compared to my more expensive laptop with CPU intensive or heavy 3D tasks. If you are running those, including things like gaming beyond the basics or rendering video, this may not be the right choice. With that said, at this price, there is no great solution.

I see another review talking about how slow the computer is, which makes me wonder if Windows was still installing updates. Any new computer is going to be slow while all that happens in the background. The network is being pushed, the hard drive is being run heavily, and the CPU is periodically busy. The only thing noticeably slow is startup. An SSD upgrade would speed things up substantially.

While I have to use Mac OS and Linux for work, Windows 10 is my favorite OS. It is flexible and easy to work with, with the most support for hardware and usually no headaches installing new devices. This version of Windows 10 is almost clean, but includes a few things that I would delete. Namely, Norton Antivirus, which can cause issues and slowdown. It is easy to delete and Windows 10 has an antivirus built in.

It is obvious where costs were cut to get the low price when you see the monitor in action. It has a large bezel, which is not such a big deal. However, the colors are washed out and even more washed out when not looking directly at it. It is one of the worst screens I have seen in a long time, and the main reason for dropping my score. It is passable, but I would personally spend a little more for a screen with better blacks and sharper details if I was going to do a lot of writing on it. While people rarely use laptops outside, the screen is also not bright enough for that. As someone who usually cranks down the brightness to save my eyes, that aspect is fine with me.

If you are going to be docking it and using standalone monitors, it supports higher resolutions well.

There is no touch screen, which I surprisingly miss because touch controls are so good in Windows 10. But, they aren’t critical. The keyboard has nice travel and a proper full layout. The trackpad isn’t as responsive as a high end laptop and the clicks aren’t as snappy, but it works properly and I haven’t had to fight with it.

Wow, the long battery life is so much better than my previous laptop, whichcould last through a movie and then be done for. This is likely due to the newest Intel CPUs being built for low power consumption in combination with Acer’s lack of concern over a big heavy battery. The result is that, as long as I charge it at night, battery life just isn’t a concern. There is even a charging port for phones or tablets that is functional with the laptop off, making this a replacement for USB batteries.

The charging itself could be improved, with a relatively large power brick. I was hoping they allowed charging over USB, but I don’t think that is available. I could be missing how to do it.

EDIT: I forgot to mention the bright blue light that stays on when it is charging and shut down. It is very annoying to have it in my bedroom. A bit of electrical tape fixes it, but I wish it wasn’t there to begin with.

The laptop is responsive and snappy for an under $400 laptop. Iâm a bit perplexed by some of the reviews claiming this to be slow. It is not. This value laptop has some chops. I loaded my desired suite of applications with Ninite dot com, that went quickly. In testing performance, I ran a Netflix movie and a show on YouTube at the same time with no performance degradation. I ran the 2+ hour movie twice while doing other stuff on the laptop and the battery still showed over 7 hours left.

This laptop has a lot of connectors: USB, HDMI, and even a VGA connection (which I would suggest dropping, if you need that just put a HDMI/VGA adapter in your computer bag). Also included is the R/W DVD drive… something becoming rare in laptops. A nice option to watch movies if desired.

The laptop display is good but has a poor viewing angle. I wasnât surprised, my guess is that this is the display was where trade-offs were made to get the laptop to this price. The display is hard to see from the side (a witty salesperson would claim this is great for privacy) and required tilting the display forward/back more than I liked to obtain the best viewing angle from the front.

The speakers surprised me. The speaker volume is typical to most laptops in that I wish it would be about 20% louder at max. The speakers seems to be nice but not amazing, at least until I was lying on a couch watching a movie with the laptop on my chest. The nearness of my ears to the speakers allowed me to hear a very nice spacial mix of the sound.. the movie sound track “bloomed” at that point and was surprisingly good. Bear in mind, I practically had to have the laptop a foot or two from my face for this to kick in.

Overall, for sub $400, this is a very nice performing laptop.

Capacity: Intel i3/6GB/1TB HDD|Verified Purchase
Fantastic product. This laptop is a step up from the previous product which only had the skylake 6 series. The 8th gen processor handles some really impressive things for the price. The only thing is that pesky 5400rpm hard drive. Simply buy a 2.5â ssd and a Sata to USB adapter. Plug the drive into the pc and use macrium reflect to copy the drive as soon as the computer is set up. Then pop out the old drive and insert the new ssd. It blows even my aging desktop out of the water. Even without a discreet card the graphics are impressive. It easily outputs 4K with less than 50% draw on integrated graphics. Although it might be limited for rendering and such. My biggest qualm is that the older model had a backlit keyboard that was great. I would have gladly paid 400 for this laptop if it only had that backlighting. As far as budget laptops go this acer is fantastic.

Capacity: Intel i3/6GB/1TB HDD|Verified Purchase
If you are willing to install a 128gb SSD M.2 2280 card ($38.00) and reinstall windows 10 onto the SSD then this is a 5 star product. Comes with bloatware and who knows maybe some Chinese spyware that the reinstall of Win10 removes. After installing the 128gb SSD and reinstalling windows 10 it performs extremely well for a $380 dollar laptop. Installing the 128gb SSD is very easy by removing 3 screws holding the drive/memory cover on the bottom and slipping in 128gb SSD M.2 2280 card. Reinstalling windows 10 is straight forward. Use the Microsoft Media Creation Tool to create a USB stick with Win10 and then use the bios to boot from the stick and windows will install itself in 30 minutes. It is rather painless. If you do the above you have a clean and fast machine.