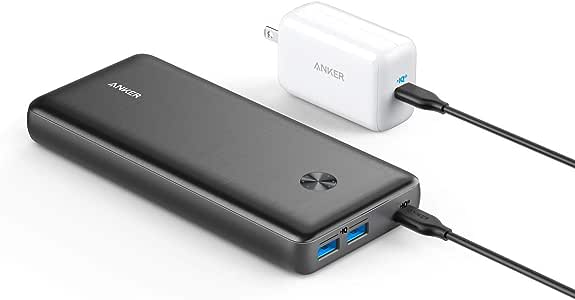 Huge Capacity
The 25,600mAh capacity gives you the freedom to keep your mobile devices charged for an entire week, no matter where you are.

Rapid Recharge
Connect the included wall charger to the Power Delivery USB-C port to refuel your PowerCore in just 3 hours.

Trickle-Charging Mode
Designed to provide optimized charging to low-power devices such as earphones, Bluetooth speakers, and other accessories. To activate, press the power button twice or press and hold for 2 seconds until the LED indicator turns green.

First let me say that this product was provided to me by Amazon at no charge. This will in no way affect my review. If it’s good I’ll tell you. If it’s junk I’ll tell you.

Let me start this by saying that this is somewhat large and heavy. It is about as wide as my Samsung galaxy s6 phone, but it is about 1.5″ longer and 1″ thick. It also weighs a little over 1 pound. It’s not a brick but it’s not something you’re going to carry in your Jean’s pocket (although it’s doable in a back pocket). If you’re going to carry it I think it would go better in a jacket inside pocket, backpack, or purse. Size is the price you pay for capacity. This thing is meant to be taken on a trip or camping and charging your devices all weekend.

The packaging it came in was very good. I’ve included photos of the contents. The manual was professionally written in multiple languages. It also came with a pouch that seems thick and durable. The power bank itself has a body made of heavy plastic with a face plate of what appears to be brushed aluminum. You can see the thickness of the plastic body where the ports are. It’s fairly thick. There is no bending of plastic when squeezed. It seems very durable. The power button is on the face and has 8 LEDs arranged in a circle like numbers on a clock. The LEDs indicate the charge left. As you charge the power bank the lights turn on going clockwise. When you use it to charge your phone the lights turn off counterclockwise. I would have preferred a digital display, but they probably did it this way to save space.

After I charged it I tested it on my 10.5″ Samsung s4 tablet and my Samsung galaxy s6 phone. The tablet has a 7300 mAh battery and the phone has a 2500 mAh battery. I took both down to 15% then charged them one at a time. First was the phone charging to 100% in 1 hour 35 minutes. The tablet charged to 100% in 3 hours 10 minutes. The phone was charged with a USB port and tablet with USB C to USB C port. All 8 LEDs on the bank were lit when I started charging, indicating 100%. After the phone was fully charged all 8 were still lit, but the 1st LED was close to going off. I connected the tablet and when it was fully charged the bank had 2 LEDs off, but I suspect if it had charged a little more a 3rd would turn off, so I’m calling it 35% bank power used to charge my phone and tablet. Now the combined capacity of the phone and tablet was 8330 mAh after taking the 15% starting charge into account. The company states that the bank capacity is 25600 mAh. I used 35% to charge my devices which is 8960 mAh. My paper napkin math is close enough to the 8330 mAh that I’d say the 25600 mAh claim is also true.

There are tons of power banks on the market. Many of them make inflated claims. I believe the claims made about this particular bank are true. And that’s a good thing. I’ve only done this limited testing but plan to charge multiple devices at the same time next. This might not be for everyone because of the size. For me personally it’s what I’ve been looking for.

I’ve had a handful of power banks over the years and the weak point has always been charging time. I am happy with how quickly this one charged my devices. It took me a while to figure out that charging time is as, or more, important than capacity. This one does both well.

I will update this review after using the power bank more to let you know how it’s performing. If you’ve found my review helpful please take just a moment to click the helpful button. I would be grateful. Stay safe out there everyone and have a great day.

This Anker PowerCore III unit is amazing. The package contains both a 65w USB-C Fast Charger and the battery itself.

The battery is bulky, but it has to be for its capacity. I say this because I recommend you check the specs on it. I could imagine some people being put off when it arrives by its size & weight. That said, I am able to charge my HP EliteBook x360 twice on it, which means I can run my work laptop for almost 12 hours without having to find a power outlet. That’s pretty amazing. Don’t forget you can charge up to three devices at once as well, although only one port is for USB-C fast charging.

Build quality of everything is great. I’ve owned a ton of Anker’s products, and they stand behind them. I once had an issue with a bluetooth speaker and they replaced it almost no questions asked. You can’t go wrong with this charging kit!!

-Premium build quality and in-hand feel.
-High performance and reliable charging from both the powerbank and wall plug.
-With my HP Spectre 360 13″ turned off, the powerbank charged it from 0% to 100% and still had half the capacity left.
_____
*Neutral:

-There is only one USB-C cable. At this price point, I would’ve expected at least two.
-The cable is too short. A 6-ft long cable would’ve been ideal.
_____
*Cons:

In terms of power and charging, I was amazed by how well both the powerbank and the wall charger could easily charge up my two main ultrabooks – a 2017 HP Spectre 13 (4-cell 43.7-Wh battery, 65W OEM adapter) and a 2019 HP Spectre x360 13″ convertible (4-cell 61-Wh battery, 65W OEM adapter). Due to the smart circuitry built into these chargers, my laptops charged up normally and at the same rates as provided by the OEM HP wall adapters – no ‘weak charge detected’ or ‘third-party charger detected’ messages.

What impressed me the most was how the powerbank was able to fully charge up my HP Spectre x360 from 0% to 100% (with the laptop turned off) and still have half capacity left in the powerbank (4 LED lights remaining out of 8). And unlike weaker-strength USB PD chargers, the PowerCore Elite III was able to continue charging my laptop even when it was being used heavily (Chrome with 26 tabs open, Youtube running, and Google Docs).

At such a high price, though, I wish Anker had done two things differently: include two USB-C cables instead of one, and make both cables 6 feet long (instead of 3 feet). Otherwise, I’m very happy and content with this combo pack and give this 4.5 stars. ð