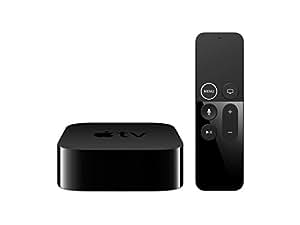 December 19, 2017
Capacity: 32GB
Summary: Who should buy an Apple TV
Do you have a 4K TV, with HDR support? Do you have an over 30 Mb/s Internet connection? Is your primary mobile platform iOS? Do you have a significant amount of content purchased via iTunes? If so, I think you will find the Apple TV to be a competently, and occasionally gratifyingly executed streamer which benefits from the strong iOS ecosystem. If not, then some other, cheaper, device will probably serve you better.

I’ve owned every single generation of the Apple TV, from the original silver box, and the 4K is the main streamer attached to my 4K TV, an LG OLED55B7. I’ve owned this particular Apple TV for 3 months at this writing, time enough to give it a proper review.

32GB vs 64GB
As content is almost uniformly streamed (although you can get limited DVR apps), any excess space would be for large asset games. I bought the 64GB version, but that was for future proofing. Most people will be just as happy with the 32GB version.

Delivering High Quality Video Content
As an owner of hundreds of iTunes hosted movies, I was happy with Apple when they announced that not only would 4K material be sold without a price premium, but existing purchases would be upgraded to 4K at no additional cost. Older movies I had purchased such as The Princess Bride, or the James Bond movies have started showing up as 4K content. Combined with the newly available tvOS settings to match content frame rate, and HDR settings, older movies are much improved especially when HDR is captured. The black levels and popping colors of older film movies, along with the loss of frame conversion judder can result in a nearly transformative viewing experience. On the downside, telling the TV to switch display mode does result in a frustrating couple seconds of black screen as playback begins.

If your TV supports HDR, the improvement in catalog titlesâmovies Iâve seen many timesâcan be startling. I did not expect movies like Ghostbusters (1984) to be as fresh looking.

As my TV supports Dolby Vision, and newish iTunes movies are typically encoded with that advanced HDR format, I am prepared for a treat when I see the Dolby Vision tag appear on my screen. Modern movies so encoded, like La La Land, make me wonder if it’s even possible for the human eye to see a better picture. If you have a new OLED, you really have to try it out.

Some apps require updates. For example, I use an over the air DVR app (MythTV) which shows signs of poor frame rate conversions and horrible color matching while using the content matching settings. The same 1080i content looks great when played via my TVs built in DLNA app. I hope this gets updated soon.

As an App Platform
Apple has made it easy to bring iOS apps to the tvOS platform, the large majority of the code for my own app runs unmodified on both platforms. So there is no technical reason for developers to avoid the tvOS platform; however there hasn’t exactly been a gold rush, and some corporate goals do clash. For instance, you will not see the highest possible quality YouTube content because of a disagreement between Apple and Google over the VP9 codec, and it took years for Amazon to finally bring (a fairly mediocre) version of their Prime Video app. I can report, however, that the Apple TV version of the Amazon Prime Video app does not skip audio like the version embedded in my TV, while still delivering stunning images as illustrated by the beautiful cars rolling throughout The Grand Tour. Wow.

I’ve been pretty happy with the collection of video streaming apps: Hulu, Netflix, iTunes, Amazon Video, and SlingTV are all serviceable, as well as local area streamers such as the live TV “Channels” app which pulls live over the air TV off my HDHomerun. It’s good that more and more services are allowing their content to be gathered into the centralized “TV” app, so that I don’t have to spend so much time looking through different apps for content. People with content purchased on Amazon, Vudu or Google Play can setup a Movies Anywhere account, and download the free Apple TV app (and even get a few free movies in the process).

As a Game Machine
Many games are available, my family is particularly fond of Just Dance which makes use of the accelerometer on the Siri remote, and I have a couple gamepads that make games like Asphalt 8 tolerable. However, the Apple TV has not become a competitive gaming destination when compared to PlayStation or Xbox

The Remote
The remote is flimsy and sometime irritating when it comes to simple actions like showing closed captions. It’s deficiencies are the primary reason I gave this streamer 4 instead of 5 stars. It works most of the time, and if you get into the habit of having Siri do things for you, can be fun. At least the 4K version of this remote makes it visually easier to tell what end is which via the simple affordance of a white ring around the menu button. The volume buttons are my favorite feature of the remote: they work with everything I’ve thrown at it: my receiver, the speakers inside my TV, various Bluetooth headphones…

Interfacing with Other Devices
I have a new Denon 4K Home Theatre Receiver and I’ve been happy with how waking the Apple TV will wake the receiver and wake the TV over HDMI, and how the TV remote can control the Apple TV, again via HDMI. It makes a universal remote much less desirable. I’ve also been happy with using easily paired Bluetooth headphones to listen at night. This, I think, is superior to the wired connection one would find on the Roku remote. However, my TV also supports Bluetooth headphone pairing, which is even better as then I can hear all the sounds, not just those coming out of the Apple TV. Inexpensive Bluetooth keyboards can be paired, making searches and password entry much easier or even better use the iPhone remote app.

I am an advocate of devices, like this one, which have Ethernet ports, as I believe in the old adage that if you have a wire, you don’t have a problem. Still, it does support modern WiFi if needed.

If you want to get deep into the Apple ecosystem, an Apple TV can act as the central hub of the HomeKit home automation environment. Thus, I can remotely manage light switches, fans, control my thermostat, and find out the temperature of a variety of rooms from my iPhone.

And ancient AirPlay is surprisingly useful for quickly bringing up content, such as sharing a YouTube video from your phone.

Reliability
I don’t believe I’ve had to restart the 4K version of this device in over a month; although occasionally individual apps will crash.

Versus the Previous Version
This contains a better processor, but I can’t say that it is any smoother than the what was already smooth, and if you don’t have a 4K TV with HDR, you will likely not notice better video quality. Functionally, the Apple TV 4 works just like the 4K. Older generations beyond that, are showing their age and I find that the 3rd generation is laggy and the 2nd generation is crashy. The 4K no longer has a USB port, so for app development, you’d best get used to remote debugging.

Summary
I like the Apple TV 4K. I wish Apple didn’t price it like an Apple product, but I use it everyday, and it does everything I want from a streamer.

December 20, 2017
Capacity: 32GB
Love the ability to use airplay to send basically anything to the TV screen. In fact, you can even mirror your iPhone screen for content that âisnt supportedâ natively. I was pretty skeptical since you can get the roku or other cheap options for less… but I have 4 of these Apple TVs now. Needless to say that I use for Hulu, DirecTV now, Netflix, etc, but for things that dont have an app yet (Twitch for example) it makes it easy to watch it on the TV anyway. Id go with the 32GB option because everything is streamed and not saved, so more memory is pointless.

Capacity: 32GB|Verified Purchase
I had the older generation , and this upgrade is so nice. It is fast, has a great interface , and will make you want to kick cable