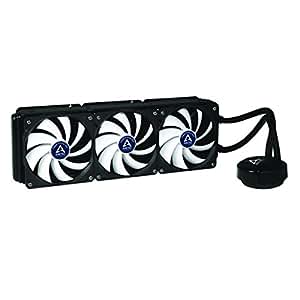 ARCTIC is a leading manufacturer of silent PC coolers and components and has initiated and sustainably influenced the trend towards quiet cooling systems. Besides a wide range of CPU and GPU coolers, ARCTIC offers high quality monitor mounts as well as an audio product line. The company, run by founder Magnus Huber, has locations in Germany, Hong Kong and the USA and convinces pc enthusiasts in over 45 countries with innovative and user-friendly products, high quality and fair prices. For more than 15 years ARCTIC stands for comfortable computing, excellent service and personal support. About ARCTIC

ARCTIC is a leading manufacturer of silent PC coolers and components and has initiated and sustainably influenced the trend towards quiet cooling systems. Besides a wide range of CPU and GPU coolers, ARCTIC offers high quality monitor mounts as well as an audio product line. The company, run by founder Magnus Huber, has locations in Germany, Hong Kong and the USA and convinces pc enthusiasts in over 45 countries with innovative and user-friendly products, high quality and fair prices. For more than 15 years ARCTIC stands for comfortable computing, excellent service and personal support.

January 24, 2017
Style Name: Liquid Freezer 360|Verified Purchase
I selected the Arctic Liquid Freezer 360 based on reviews from HardOCP, which gave very high marks to the 120 and 240 variants of this cooler. I installed the 360 in the front intake of Corsair Carbide Series Air 740 – High Airflow ATX Cube Case (CC-9011096-WW). (A GREAT case, by the way.) All six fans and the radiator fit inside the case — no fans mounted outside the case.

Oddly, the instructions recommend configuring the 6-fan cooler as a push-pull INTAKE (not exhaust) for maximum cooling. That contradicted what I initially thought — I mean, why drive heated air through your case? Why not configure the cooler as a push-pull EXHAUST? But I followed Arctics recommendations nonetheless. The three 140-mm Corsair fans that came with the case are now configured as exhaust fans (two on the top, one on the back). The result is enormous airflow through the Corsair case.

PROS
Now that my build is done, I’m quite glad I bought this cooler.
* This cooler does an excellent job of cooling. During a 15-minute stress test of my gently overclocked Core i7-6700K, the highest temp I recorded was 61 degrees.
* This cooler is really quiet with the CPU at idle. And even during CPU stress testing, the noise level was excellent. (No roaring fans.) Indeed, most of the noise of my build is from the fans that came with my Corsair case. And those fans are quiet.
* There is no “pump” noise that I can detect. Indeed, when I turned on my rig for the first time, I had a panicked moment — was the pump on? Did I forget to plug the cooler pins into the motherboard? It was that quiet. I’ve heard people complain about the pump noise with water cooling, but I can’t hear any pump-related noise on this cooler.

CONS
* Price: yep, this thing is pricey. For most builds, I think the 120 or 240 versions of this cooler would suffice — easily. I went with the 360 version because of my specific use case … number-crunching, which can intermittently pin all CPU cores to 100%, sometimes for extended periods. (And it can be hard to predict when an analysis will do this.)
* Big: a 6-fan 360 cooler is .. well … big. Make sure that your case has adequate room, especially if you configure this cooler with all 6 fans in push-pull (as I did).
* Slight irregularities in the radiator grill. Some of the intricate metal grilling on my radiator looks like it might have been damaged, perhaps during shipping. It doesn’t seem to have affected cooling performance (see below), so I’m okay with that. Besides, in push-pull configuration, your radiator will be sandwiched between two sets of fans. So no one will see the radiator grilling anyway. 😉

STRESS TEST RESULTS
My goal was to gain some confidence that my rig could run computationally intensive algorithms in parallel without damaging my CPU (or reduce it’s lifespan).

I run Linux on my rig, so my testing was done using “psensor” (for monitoring temps) and “cpuburn” for stressing the CPU. My ambient temp (as measured by my house thermostat) is approx 24C. At idle, my CPU temps were 26C.

To truly stress my CPU, I kept hyper-threading enabled in the BIOS. The stress test was to run eight instances of “burnP6” simultaneously, which pushed all 8 hyper-threads to 100%.

I ran the test for approximately 15 minutes. During the test, the CPU temps hovered around 58C +/- 2C. The recorded maximum CPU temp on any core was 61C over the 15 minute period. I stopped the stress test at 15 minutes because it became clear that the CPU temps were not trending higher. (And since my testing method was not rigorous, it seemed pointless to refine the estimates too much.)

Even during the stress testing, the 360 fans were relatively quiet. And the volume of air through the case was excellent.

If this review was helpful to anyone who must make a decision, then I am glad.
Live, Love, Linux =-)

Style Name: Liquid Freezer 360|Verified Purchase
Impressive for the price. I was using the Corsair H100i v2 but that could barely pull off the 5ghz clock on my 9590 and the extra fans help a lot. This took me a bit beyond to 5.20ghz almost flawlessly, with some noise of course. The quality to me surprisingly isn’t far off from the Corsair and you get so much more except the LED but that’s fine by me as I found the USB plugin on the Corsair to be rather annoying. That and I enjoy the fact that I didn’t need to find room for a splitter as all the fans can be conveniently daisy chained, Overall some things in my build needed to be sacrificed for this too work but it’s well worth it.

January 19, 2017
Style Name: Liquid Freezer 360|Verified Purchase
I used this as a replacement for my CM Seidon 240 and its great so far.

My only gripe is that to install the top fans on a horizontal top of the case, you gotta hope the PCMR gods are with you as you have to line up at least 6 of the 12 holes in order to install them.

Maybe arctic could include a tiny bit of sticky paste or tape to hold them in place while you are positioning them for install?

Overall though, i am very impressed with the cooling capability of this AIO. Dropped my temps roughly 15C over my older Seidon.

August 17, 2017
Style Name: Liquid Freezer 360|Verified Purchase
I have mine mounted as an intake on an Enthoo Evolv case. Very happy with it, cooling my Ryzen 1800X. I had to move stock fans around to do this, but it turned out nice. Speccy reports my temp idling at 47 deg C, It hops up to 57 or so then drops down. I’m overclocked to 3949 MHz at the moment. I have not run Prime or other get things nice and toasty apps to see if it could stand this clocking for long periods.
What could possibly be better? It would be cool to see some sort of display on the pump unit to show color for temp or some RPM display.
Overall this is a great value, and when I got it, pcpartpicker did not even list it as an option. I just saw it in a completed build and said, must have.

The installation isn’t too difficult if you know what you’re doing. For some cases (I recommend Corsair’s large case) you have to remove the built in case fans and then screw these in but they fit perfectly.

Style Name: Liquid Freezer 360|Verified Purchase
the fans that come with it do the trick but they are airflow fans and not static pressure. they are also 3 pin and not 4 pin but get the job done. biggest issue though is that they are very loud running at max (which is the only setting as a 3 pin). They did keep my overclocked ryzen 1200 to 4.2ghz around 34 C and I look forward to what they can do to my 7700k oc 🙂

Style Name: Liquid Freezer 360|Verified Purchase
Really cools the CPU! Temps went down from 90C to 60C at full load with a respectable overclock. It is super loud though. It might be a problem if I wasn’t using a headset most of the time anyway.

Style Name: Liquid Freezer 360|Verified Purchase
install was a bit of a pain trying to sandwich 3 fans between the radiator, the rest was pretty easy. After 15min with prime95 running and an 85f ambient temp cpu temp stayed at a level 38c I think it might be better than the corsair h110 that died on me…I used a push-pull fan setup on that as well. Couldn’t be happier it keeps my fx9590 nice and cool.