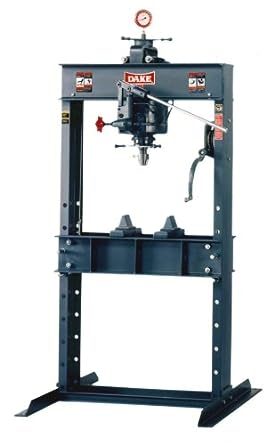 The Dake 75H hand-operated H-frame hydraulic press applies up to 75 tons of force to facilitate pressing and forming. The channel iron H-frame accepts large and bulky items, and the hoist adjusts the table height for proper positioning and automatically locks in place. The workhead is mounted on bearings to enable adjustment for off-center pressing. The handwheel advances the ram for quick placement near the object being pressed. The handpump lowers the ram onto the object with more precision and control than the handwheel. The release valve turns to release the hydraulic pressure, initiating rapid ram return after downstroke. Closing the valve at any point during the ram return will halt the ram.

The press has a gauge with a 4″-dia. display for pressure readings. It also includes two table plates for support and two V-blocks that hold the item in place during pressing. Interchangeable V-shaped and flat shaped ram noses are also included. Four 17/32″-dia. holes are located on the base to enable bench mounting. Mounting hardware is not included. Hydraulic oil is not included. Press is assembled.

Hydraulic presses use fluid pressure to transmit a compressive force, which stays constant throughout the length of the ram’s stroke. Metal forming is one common use of a hydraulic press.

What’s in the Box?