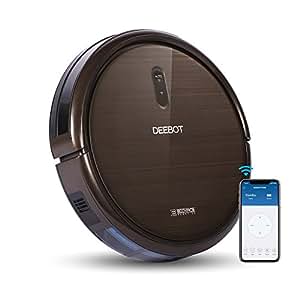 Both are equally good at transitioning from hardwood floors to rugs, but neither are great at high pile rugs.

The Sharks front side spinning brushes are designed slightly different and are not as long as the Deebot and seem to do a better job of not slinging things across the floor before it is able to be picked up. However, the Deebot does a better job picking up particles around edges because of its longer reaching front spinning brushes.

Both dust bins are almost identical in size and look.

The Sharkâs remote does not offer directional control where the Deebot does.

The Sharkâs brushroll has a slightly different design that requires less maintenance and doesnât get hair tangled on it as easy as the Deebot.

The Deebot is slightly better at maneuvering and cleaning on carpet and in my opinion itâs brushroll design is better suited for carpet than the Shark.

The Deebot runs for about 15 minutes longer before needing a charge and heading to its dock.

Both are equally good at being able to find its dock and return to it (neither has failed to return to their dock).

The Deebot offers more features such as iPhone or android app control, edge mode, spot mode, and other modes and app control options that the Shark does not.

The Deebot is a sleeker and more sophisticated looking machine.

Both are manufactured by Ecovacs.

The Shark is about $50 more than the Deebot.

Amazon and other retailers donât sell replacement parts for the Shark. Instead you have to buy them directly from Shark.

Amazon sells replacement parts for the Deebot at a reasonable price and it comes with a Amazon coupon code for 25% off accessories.

The amount of noise emitted from both is about equal, but both are extremely quiet in comparison to a iRobot Roomba 690 which sounds like a freight train going across your floor.

The front wheel on the Shark has a larger inner cavity and seems to get clogged up with pet hair more easily and requires more maintenance than the Deebot.

Both are very good at cleaning the floors of dirt, debri, and large amounts of pet hair.

Both have easy to access filters, however, the Shark has a more durable filter that should last longer and most likely filters better.

Iâll let you decide which to buy, but my opinion is that the Deebot is the better value since it cleans equally well, has more features minus the lack of boundary strip ability and costs considerably less.

Update 3/24/18:
After noticing cosmetic similarities between the Eufy RoboVac 11+ and the Ecovacs N79S, I did a little research and discovered that the Eufy is manufactured by a company that is owned by Ecovacs. I havenât used the Eufy 11+ yet, but it appears to be identical to the Deebot N79S minus the WiFi ability. Right now the Eufy 11+ is on sale for $170. If I didnât already own two great robotic vacuums that are manufactured by Ecovacs, Iâd be buying the Eufy 11+ because of the much lower price.

Update 4/8/18:
I experienced the Shark having erratic behavior such as stopping for no reason in the middle of the floor while beeping and flashing its lights. I discovered that the reason was due to debri and pet hair obstructing the sensor lenses under the front wheel. It was easy to remedy once I pulled out the wheel assembly and cleaned inside the area where the sensor lenses are located. The Deebot does not have the additional sensors located under the front wheel. Iâm not sure of the purpose of the sensors located under the front wheel, but Iâm glad the Deebot doesnât have them because the Shark has required more maintenance because of them. My overal impression of the Shark has changed substantially since my initial review. I no longer would put it in the same quality category as the Deebot. The Deebot, in my opinion, is a higher quality product that requires less maintenance and is more reliable.

Update: 6/18/18
The Deebot N79S and the Shark Ion Robot 720 are both still going strong and run just as good as the day I unboxed them. Both have been run at least daily and sometimes twice daily. I always run them together to get the job done quicker and to ensure every square inch of my floors gets covered while they are running. The Shark has required a little more maintenance, but as a whole itâs still a great and worthy machine. The Deebot is still my favorite though!

I hope my review was helpful!

Format: Kitchen|Verified Purchase
Did a LOT of research on robot vacuums before finally purchasing this one. LOVE IT for many reasons:
– cleans better than expected
– navigates the rooms in our house very well
– can go over a pretty steep threshold between our living room and kitchen
– cleans carpets very well
– finds its docking station pretty much every time
– slim fit means it goes under every piece of furniture we own – and I hardly ever cleaned under these (yuck!)
– simple and useable app on my iPhone – can schedule it to turn on whenever you want, any day of the week. Also, you can turn it on from anywhere!
– quiet – not too intrusive even when watching a movie in the same room

So for these reasons I would HIGHLY recommend this little guy! Still remains to be seen how durable it is – so far so good but it’s pretty new still.

Format: Kitchen|Verified Purchase
I bought my robot on March 5th. As soon as I received it, my husband put it together, and said, that he had no problems at all, setting it up. I downloaded the App, but I do not use it often. My 19th year old autistic son named the robot: Amber. I love Amber. She saves me so much work. She gets stuck sometimes, as she tries her hardest, when she does the edges, and she does not take no for an answer, when I tried to put some obstacles in her way, in order to protect the electrical cords. She mistakenly takes my obstacles, as edges, and she pushes against them, trying to clean them. She does the edges very well, by the way. I found that her cleaning is pretty thorough. If you want the maximum result, allow her to roam around, and do her work. She will eventually pick up that dirt, that you think, that she has neglected. Her pattern is random, and she is not in a rush during her run. I usually let her do her thing, and I get busy, doing something else. Her charge can last close to 2 hours. She does not do well with dark furniture, and she bumps into them. She is gentle, however. I have not seen any damage. When she is persistent in her edge cleaning, she moves things around, and she beeps when she is in trouble. At first, it took her awhile to get back to her base, especially if she is vacuuming an other room. But if she is in the same room as her base, she will find it. Since I have a large great room, she gets confused a bit. She has gotten better, though. I love Amber. She does not complain, and she never talks back. I think that Ecovacs Robotic has greater potential in the robotic cleaning industry. They have been able to provide to someone like myself, a very easy to use robot. I am not into complicated features, that I may not even use, and I have the feeling, that they will be coming out with more outstanding and more sophisticated features, for the special group of buyers who want them! The most important thing should always be Customer satisfaction, and every industry should thrive for that. “If you build it, they will come.”
NOTE: I did not get paid or received a discount for my opinion! I just love my Amber.
March 8, 2018
Format: Kitchen|Verified Purchase
Our “Beeboot” as my wife has renamed it is awesome!! Way exceeded our expectations. I did a lot of research and compared pros and cons with various brands and models and this was truly the best(especially for the price)! It has WiFi for app control, it connects with Alexa, and comes with a remote. My wife vacuumed with our Dyson before hand to tidy up a bit and not overwhelm Beeboot. We still had to empty out his dust bin twice that first time. Keep in mind we have 4 German shepherds and a cat. So now we run Beeboot nightly to clean and he does his own thing while we watch tv. My shepherds just lay around until Beeboot comes around and know enough to move when he comes their way. My cat just hides until Beeboot is done.