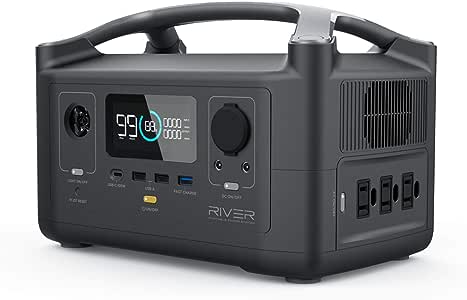 I found it very useful in my customized camera cart thanks to its compact size, when doing Amazon Live Streaming, keeping laptop, camera, lighting systems charged at all times, without having to plugin to a wall outlet.
Going cordless is such a great experience and made my workflow a lot easier — There is only one device to charge, everything else can be powered from this power bank.

The fan on the right turns as soon as the AC charging starts (I measured 250W max, 110W when set to “quiet charging” mode via phone App.)
There are USB A ports + one 100W PD port in front, I wasn’t able to max out the 100W load due to the limited power draw of my MacBook Pro 13” (measured 45W max). I currently do not have a device that takes PD port with such high power draw so I think the 100W PD output is going to be more than enough for most use case.

There are 3 AC ports in the back but I void using AC ports, not because they are bad but DC is simply more efficient and less conversion loss.
In other words, if the laptop / small electronics has the option to use PD /USB port, then use them, and avoid plugin their own AC chargers.

If there ports are not enough, I can always plugin a 12v car charger to the 12v socket and get extra 1 PD + 2 USB ports, depending on the 12 charger I have at hand.

With 100W solar panel I was able to get 50W solar input power with the included cable (winter, Nov 2020)
There is an important catch, users be aware:
When charging via solar, make sure to set SOC level to 100%, or it may limit the input to around 7W.
I hope the app or firmware can be updated to make this impact more obvious.

Overall its hardware and software design is very sophisticated and performed very well in all my testings.


I was on an important Zoom call this afternoon when we lost power due to a severe thunderstorm. Thankfully, I had bought one of these EcoFlow River 600 Power Stations a week before, and had already fully charged it up to perform some testing of it. What better test than to put it in a real world situation! In less than 5 minutes I was able to connect my computer, monitor, and networking equipment up to this power station and jump back on the Zoom call, which lasted another 45 minutes or so. My entire team was impressed with how quickly I was able to re-join as if nothing happened. If I had thought ahead (with the advanced knowledge of the severe thunderstorm warning) I could have pre-configured this to act as a UPS, and I wouldn’t have gone down at all.

As to the specifics of the power station itself, I am highly impressed. The first thing that impressed me is how fast this power station charges. I plugged it in with the included AC cord (standard IEC cord) and it was fully charged barely an hour later! I love that it can be recharged so fast with just an AC cord, no separate power supply required. I haven’t tried DC/solar charging yet, but I love having that option as well, and love that it uses a standard XT60 plug in case I need to create my own charging cables for any reason. The included charging cables (Solar/Car) seem to be of high quality 14 AWG wire (although not the super flexible silicone wire).

The other thing that impressed me is how smooth the AC output power is. This is an impressive inverter, that no only produces a true sine wave, but also has the ability to power heavier appliances than would normally be possible. My desktop computer seems to like this pure sign wave power much better than the modified sine wave inverter that my previous DIY power station produces.

The Smart app was easy to install (listed on the Google Play Store) and connect. It required holding down the IOT reset button for a few seconds and then connecting my phone to the presented WiFi signal so the app could configure the River 600 to connect into my home network. Once connected to my home network the app presented with all sorts of monitoring data and control options. Pretty much anything (and then some) that can be viewed or done on the unit itself can be viewed or changed in the app.

I also love the light weight and portability of this device, with its convenient carrying handle and durable exterior. I can easily see bringing this along on various trips to use as a central power hub for recharging various devices and powering small appliances. The run-time is highly dependent on what kind of power is being drawn by the devices/appliances, but is pretty reasonable for something this size/weight. I am contemplating getting the extra batter to double the runtime. I really like that informative display that shows at a glance the current charge %, hours/minutes remaining for charge or discharge, and incoming/outgoing power draw.

One other feature worth mentioning is the DC output ports seem to be regulated to behave like a true vehicle’s alternator. So, instead of just outputting whatever the internal battery voltage is at, it outputs around 13.6V at all times. This is very helpful for running certain external appliances that are tuned for normal car DC voltages that prefer more than the nominal 12V.

So far the only potential issue I have with this power station is the fan noise that is audible whenever the unit is charging or the AC inverter is turned on. It seems to run at full speed regardless of charge/discharge current, even when I turned on the quiet mode in the app. Possibly something is wrong with my particular unit, but that may be something to keep in mind if expecting super quiet operation.

Overall, I am really happy with this power station, and think that everyone should consider getting one for emergencies and convenience.