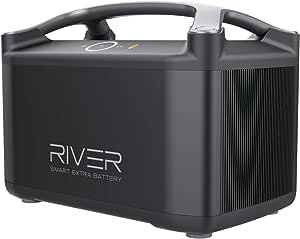 Reviewed in the United States on March 4, 2021
Verified Purchase


The Ecoflow River Pro is the largest of the River line and also the most expandable with the optional extra battery pack. This is the best performing small portable generator in its class – anywhere. With a 600W (1200W surge) pure sine wave inverter, a 720WH Liion battery (no, not LiFePO4) and a maximum 660W input charge rate, this is a small beast. Other comparable models have 300W inverters, 500WH batteries and a measly 100-200W input charge rate that takes half a day to recharge. The River Pro absolutely recharges to 80% in 1 hour flat and only takes an extra 45 min to top off to 100% – all with a battery that’s half again bigger than the 500WH competition.

This unit is not designed for BIG applications such as running an RV or home backup power. But it could run a home fridge in a pinch and will cover all your weekend camping lighting and recharge needs. It can even run a TV for a few hours and if you’re on the road you can have it recharged and ready for the next night, no problem.

There have been some other reviews talking down about not having LiFePO4 batteries because that was what had been purported in the Kickstarter campaign. But this is a production unit and is properly advertised as LIION which is rated at 800+ cycles to 80% capacity. Several features were changed and most of them were an improvement. Funding a Kickstarter campaign always contains risk and sometimes the products don’t make it to production at all. All I can say is that this is a fantastic item and works better than advertised, so far.

Sorry for the long review. No, I was not given a unit or paid in any way for this review and I don’t normally write these. But after much research and reading, I chose this one and it has exceeded my expectations.


Bought for the power storage capacity, “ups” pass thru, high speed charging and no need for odd bulky power brick for mobile use or home blackouts with medical equipment. It recharges fast and 600 watt inverter is decent for most uses. However I was disappointed when I learned after purchase that the the reviews and eco tech info I had read showed that the R600 pro renamed to the river 600 pro WERE FUNDAMENTALLY DIFFERENT. The R600 apparently used high life cycle lithium Iron phosphate that provide more discharge/recharge cycles than than the lithium ion 18650 packs the river pro has. I feel they should have made this more clear which creates a bait and switch vibe. Using just a rename to shadow key design performance changes is a bad move. It is a great design otherwise, wonderful screen, well engineered box, fantastic handle, and as above features make it a better choice for this class of device. It just could have been mindblowingly amazing had it been LiFePO4. The bluetti and a couple others have much better battery chemistry but their design seemed weak and limiting and functionality while decent lacks innovation that the ecoflow river pro has in abundance. I have edited up my original review because a deeper dive into the competition for better left me glad I bought this. I may even spring for the expansion cell since the pair is a good flexible solution for portability with power density. I have connected the river pro to 2 x 100 watt 3rd party folding solar panels via accessory parallel mc4 connectors providing 160 watts and that gave me great peace of mind as it charged nicely with the mppt controller built in. The light could be better to be a cob flood panel style. While I didnt buy it for its light this modification would really be thoughtful. Overall I like the unit for what it is in the place it holds. There is room for improvement as I wish ecoflow could put the battery chemistry right. If they did It would be a much more outstanding product than it already is. The pass thru ac, interface choices, no brick, clean clear interface, smart charging, rugged feel, and software upgradability are all top notch. In the product lineup this is the best value especially considering the expansion cell as it enables me flexibility to configure and use as I have need. Other products create a unit designed for a couple specific use cases. Ecoflow river pro has the capability, capacity, and options that let me adapt IT to MY changing use needs which greatly increases its value to me especially as a product type intended to fill a needs gap.

Reviewed in the United States on March 16, 2021
Verified Purchase


River 600 pro is very easy to move around and has lasted on a full charge 4 nights running my CPAP machine, without a problem. Is a must during a power outage. The fan noise level is noticeable but not to bad.


Just received the ecoflow 600. To early to rate, however initial impressions are excellent. IOT worked perfectly, firmware upgrade went well and instructions were easy to follow.

Reviewed in the United States on March 18, 2021
Verified Purchase


Wished its surge could handle 1800w

Reviewed in the United States on March 18, 2021
Verified Purchase


The extra battery seems to be really good I like the design it is smaller than the 1500 but it is smaller capacity which is something okay…. I would recommend the product for anyone

Reviewed in the United States on February 22, 2021


So turns out ecoflow river pro has lithium ion battery rated at 500 cycles not Lithium Iron Phosphate like the kickerstarter R600 Pro which were rated at 3500+ cycles. Careful with models they are confusing. Not sure why they didnât produce R600 pro, lifepo4 cells much longer lifespan.