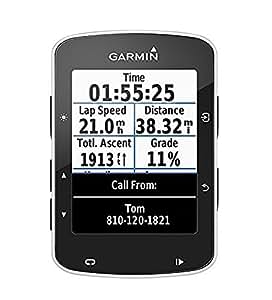 August 10, 2017
Verified Purchase
I own, and have owned, over 20 various Garmin products. I would call Garmin a very average company. When they do something well, it’s done really well. When one of their products is bad, it’s epic bad. When epic bad, Garmin doesn’t seem to care very much about their angry customers.

Here is the story about the Garmin 520 I just purchased. I got it for $250. It was reported as new and sold by Amazon LLC. When I received it and un-packaged it, it didn’t look new. Some of the packaging appeared to have been opened and the sticker on the face of the device was badly misaligned. A closer inspection showed a couple of minor scuff marks and wear marks around the mounting prongs on the bottom. I didn’t think much of it at the time.

When I initially synced it with my Garmin Connect account it uploaded approximately seven workouts that had been saved to the device. At first I thought they were sample workouts. They were also uploaded to my Strava account. When I looked at the uploaded workouts, they did not appear to be “sample” workouts, but instead workouts from someone that had already used the device. Thanks to the magic of Strava and the site’s ability to match riders up that do a similar workouts, I was able to determine exactly who had the device before me, which was actually some that lives in Tucson (I live in Phoenix) and we have mutual cycling friends. After reaching out to him, I learned the device was in fact used, broken and returned to Amazon. Looks like they repackaged it and sold it off again without deleting any of the information on it.

So let me be clear, the device is solid. It is an improvement over the 510, if you employ many of the ConnectIQ 2.0 apps or fields. If you don’t use them, the 510 does everything this device does minus some of the fitness reporting and recovery metrics. My concern is with my receiving, what is effectively a refurbished device, when it was advertised as new. I don’t know where the blame lies, with Amazon or Garmin, but buyers beware. Check your product very close to ensure it is new when buying.

(Attached picture is one of the workouts that was on the device which did not belong to me. The icon clearly shows who it did belong to after Strava matched up the workouts.)

August 2, 2016
Verified Purchase
I have a Garmin Edge 1000, and the 520 recapitulates all of its functionality on a smaller screen. Navigation and selection through buttons is more tedious than with a touch screen, but more reliable.

One difference from the 1000 is that the 520 does not navigate reliably with GPX files. You need to use TCX files. But the biggest difference (and drawback!) for me is the map size. You can only put a 50 Mb map on the unit, versus several Gb for the Edge 1000. This means that instead of having a cycling/hiking map for the entire US, I can only put on a map for my local area. This is a pretty big drawback, as it is precisely when you are going to a new area that your Garmin could be most useful. You will need to remember beforehand to take your current maps off and put on those for the local area where you are going. If you forget and download a ride, you can still navigate along the course, but you will get no guidance when deviating from it.

Why did Garmin not include an expansion slot for a 4 Gb memory card as they did for much earlier units?

Verified Purchase
I have been using this bike computer for a year and a half. It took me a bit of time at first to configure it the way I like it, but I haven’t had to reconfigure it since. I have two screen setups that I switch back and forth between depending on what I’m doing – one has a summary of time, distance, grade, calories, etc. The other has power, cadence, speed, and heartrate. The unit is synced with a Stages power meter and a Wahoo TICKR heartrate strap.

I recommend putting on one of the silicone cases and screen protectors to protect the unit. I managed to scratch my unit when I inverted my bike on the road to replace a wheel and didn’t realize that the crown on the road and the gravel on the road was enough to allow the Garmin to contact the road. The top edge of the case and screen was badly dinged and scratched from the gravel.

The Garmin auto-syncs with Strava through my iPhone. As soon as I complete a ride, within about 15 seconds or so I get a notification on the phone that the ride was uploaded to Garmin and Strava, without any intervention from me.

The battery seems to last for several 2 hour long rides before needing to be recharged. I have used it on one day ride that was 7-8 hours long successfully. The screen contrast is a little dim during the day but can be read ok. At night there is a backlight that does drain the battery somewhat rapidly.

I like it and would have bought it again.