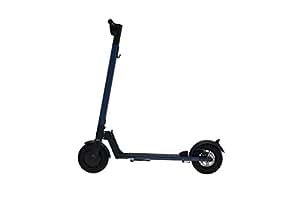 Amp up your work or school commute with the GOTRAX GXL electric scooter. With a boosted 250-watt engine, your GXL e-scooter can reach a top speed of 15 mph! Cruise casually to and from the grocery store or make it on time to that lecture on the other side of campus. And with a total range of over 12 miles on a single battery charge, youâll never have to worry whether or not youâll make it to your next destination. Stand out from the other commuting electric scooters by blending in! The GXL scooter is crafted with a sleek, wireless design so you arrive in seamless style, every time. But youâre not trading in durability and function for style – the GXL electric scooter comes with a fortified frame and specially designed features. The GXL e-scooter is equipped with a dynamic handlebar display built right in – meaning you can keep track of your battery life, headlights, and speed all at the touch of your fingers! The GXLâs reinforced X frame allows it to support riders up to 220 lbs – making it one of the strongest portable commuting companions on the market! And LED headlights mean your ride isnât limited to just the day time! Make it to a midnight movie or take a moonlight joyride. Ride over all those familiar bumps and cracks in your sidewalk knowing youâre in good hands – the GXL electric scooter is designed to be not only durable but IP54 water resistant as well! The scooterâs airtight design means it can handle almost any puddle or small splash in its path! Feel like a race car driver with all of the GOTRAX’s safety. The GXL scooter is equipped with both handlebar brakes as well as rear disk brakes And once you get to your destination, use the GXL electric scooterâs responsive dual brake system to come to a stop – as slowly or quickly as you need! And with the a GOTRAX e-scooterâs Lithium rechargeable ION battery, youâre commute carbon footprint just got that much lower! Simply plug in your scooter, charge, and get ready for unlimited electric fun!

August 6, 2018
Color: White|Verified Purchase
I mainly use this to commute through New York City, and I can honestly say I’m impressed with the build quality. Everything seems well built, and the large, air filled tires make this feel more stable than the other scooters I’ve used. PROS – Great range – 10-12 miles is easy to get on this. Stability is extremely good. The rear disk brake is super effective, I love that it has a foot operated button to brake the rear disk brake. It’s very powerful, I got it up to 18 miles per hour, which is VERY fast for a scooter, and it gets up to speed quite fast as well. CONS – It’s a bit heavy, due to the quality construction and heavy duty materials, it isn’t exactly lightweight. The handle bar operated brake isn’t very good at low speeds. Finally, there is no regenerative braking, which can be helpful in extending the range of the Scooter.

At around 400 dollars, this is the best bang for buck scooter on the market, I recommend it.

Color: Black|Verified Purchase
Recently I had the opportunity to ride one of the new bird scooters in my town. I really loved the convenience and idea of not having to move my car when I went to lunch or get coffee, but I found that ride-share could also be not so convenient when I was in a time crunch, as they are sometimes hard to find. So I decided why rent when I can buy.

Last year I hadÂ Â purchased a hoverboard from gotrax.com and it worked out great for my son, so when I received an email from them about their new product launch I decided to give the gotrax gxl commuter scooter a shot. Here are my thoughts… Speed, obviously the first thing I noticed is that mine was faster than the advertised speed of 15.5 mph, I had this thing clocking almost 18 in second gear.Â Â With that speed the stopping power was equally as great, they conveniently placed a foot brake on the rear of the deck which controls its rear wheel disk brake which works amazingly… the kid in me had this thing getting sideways on the gravel like I used to do with my kick scooter when I was younger. Overall it just feels like great craftsmanship, it is really sturdy,Â Â well constructed, and folds perfectly to fit in the trunk of my car. Oh ya the headlight is really nice too. Additionally it also has another feature of regenerative disk braking, that is suppose to add power back into the battery system, although I am not quite sure how to test.

I’ll have to say I am brilliantly surprised at how great this folding electric scooter is for the price point at which they are selling them, the other e scooters on the market are way higher priced. I will likely buy another for my eldest son as he is getting ready for college and this will be great for helping get across campus and to class on-time. I am now a scooter guy.

Color: Black|Verified Purchase
I’m 190 lbs and I bought this to commute 1 mile to and from work in hilly terrain. The previous e-scooter I bought from a different company died in 3 days and couldn’t go up any hills. But the GOTRAX GXL has so much torque and off-the-line acceleration that it has no problem doing 8-10 mph up these steep hills! Seriously awesome e-scooter.

PROS:
– Awesome amount of torque and the only e-scooter I tried that actually does deliver on the 15+ mph claim. I’ve clocked speeds as high as 18 and 22 mph during various points, not necessarily going downhill
– Solid construction which looks and feels great
– Steering doesn’t spin 360 degrees but locks instead (huge safety feature!)
– The rear disk brake works great, though takes some time getting used to
– The speedometer is actually in MPH
– Headlight is very bright and practical

NOT-REALLY-CONS:
– The throttle, while variable, is very touchy. Seriously this thing has some kickback and you hit the juice. You have to be careful with the throttle at low speeds. It’s doable, but takes practice. It’s a bit scary, but also really fun. So not really a con, but it does make it difficult to maneuver at slow speed. The 1st “gear” helps, I guess.
– Electric brake isn’t very powerful, but it looks like it may be recharging the battery? It does the job, but at the speeds this scooter coasts you’ll need to use the rear disk brake or you’ll have a rather long stopping distance. Again, probably a good thing you can’t lock up the front wheel, though.

Overall, very happy with this purchase! Hoping it will last a while commuting 10 miles a week during work days. Really awesome e-scooter!

August 4, 2018
Color: Black
I previously owned the gotrax glider, a pretty decent scooter to say the least. I had a few problems and was able to return them due to the excellent customer support. Compared to the glider, the GXL is better in almost every way possible. The acceleration and brakes are a lot smoother and responsive. The added disk brake allows you to stop the scooter almost instantly. The front light is great, and allows you to see a slot farther than the basic glider light. The battery life lasts me about 9-10 miles when I am riding at max speed, and takes about 4 hours to fully charge. Finally, the ride is extremely smooth. Riding it throughout NYC over the countless bumps and cracks it remained extremely smooth, with no complains. The handle bars are also wonderful, making long rides not a problem. I definitely recommend this scooter for this price.

Color: Black
Super fast shipping. Had the scooter in 3 days!
The scooter came charged and was very easy to assemble – only took one screw!
Iâve only had the scooter for a day, but am absolutely loving it!! Rides very smooth. The light is bright enough to ride at night.
Going straight I toped out at 18!! mph. Thatâs plenty fast! The scooter has 2 speeds!
I love that it folds! The quality is excellent. For the money, you canât buy a better scooter!

Color: Black
Hands down, this beats ALL other electric scooters