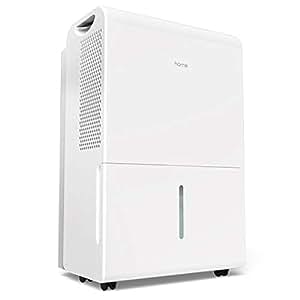 Foreword: These are two of the most highly rated and popular dehumidifiers on Amazon. So I thought it may be a good idea to compare them side by side since I happen to own both. Iâve owned Frigidaire for about 9 month and hOmeLabs for about a week.

EPA recommends indoor relative humidity levels 30-60%. Both of these units are well capable of maintaining that. Another note is that both of these units are appliances that do electrical work, therefore, they do generate heat. If you live in a climate where you donât mind a certain amount of heating (Pacific NW, Midwest or New England), these are perfect. If you live in the South (TX, FL, etc), regular A/C unit should generally do an OK job of controlling humidity, but if you want an additional de-humidification capacity, youâre much better off investing in a portable A/C unit. Most of them have a de-humidification mode and typically draw out comparable amount of moisture. The other great benefit there is that they pump the heat outside (through the window exhaust) resulting in cool dry air inside.

Back to comparison. In general, both of these units are really good and will get your humidity down. I would recommend both of them heartily, but they do differ in finer points, which is what detailed below:

QUALITY OF THE BUILD: Both of these units are solid. However, Frigidaire is physically smaller and much more polished. Somehow the plastic enclosure of hOmeLabs unit feels flimsier.
Winner: Frigidaire

EASE OF MANEUVERABILITY: Both of these units come with casters attached and are breeze to roll around. Frigidaire has a handle on top and hOmeLabs has 2 handles on the sides.
Winner: Tie

EASE OF OPERATION: It is super easy to operate both of these units. No manual needed at all. The buttons and lights are practically identical too. One difference is that Frigidaire hydrometer goes in increments of 5% whereas hOmeLabs specifies the humidity in 1% intervals.
Winner: Tie

MAINTAINING HUMIDITY LEVEL (AUTO ON/OFF): This is where both units fail in my opinion. The idea here is that you can set a humidity level to maintain and the unit will automatically turn off when it reaches it and turn back on when the humidity rises again. Nice idea. The reality is that these units collect and store water, as such the humidity around them tends to increase quite rapidly once the airflow ceases. Frigidaire deals better with this problem by extending the window for off/on. For example, if you set the desired level at 50%, itâll run until it hits 45%, and it wonât turn on again until humidity rises to 55%. It usually keeps off for about 10 mins, with the overall humidity variation during this time 1-3%. hOmeLabs unit is just a fail when it comes to this feature. It turns off as soon as it goes 1% below the set level (49% in my example) and turns back on 5% over. For some reason this takes about 1-2 mins, with no measureable variation of humidity elsewhere in the area.
Winner: Frigidaire (but still fail)

COLLECTION BUCKET: Both of these units come with ~1.6gal buckets that collect water. This is where you get to practically experience quality of the build as this is the part of the dehumidifier you will interact with the most. Aside of build and plastic quality here, one big practical difference is that Frigidaire includes a splash guard so you donât have to worry about the water splashing all around while you carry it to the sink or tub. No such luck with hOmeLabs unit.
Winner: Frigidaire

WATER LEVEL INDICATOR: If youâre using the bucket for water collection, this is the part of the dehumidifier you will most likely to look at the most to try to figure out whether you need to empty the bucket now or wait till later. This is where hOmeLabs stands out. It has a bright green bar that floats on top of the water to indicate its level. It also feature a much more of vertical opening for the level to show. In contract, itâs practically impossible to see the level of the water in Frigidaire. Thereâs nothing floating on top and contrary to the pictures of the product, it does not come with light blue backlight illumination.
Winner: hOmeLabs

HOSE DRAINING: I havenât used it on either unit, but both units have it. hOmeLabs has it at the back, and Frigidaire has it on the side.
Winner: Tie

TEMPERATURE: Both of these unit generate heat, as I mentioned above. This is a basic part of the refrigeration cycle. Unlike with AC or a fridge, the resulting heat is mixed with exhaust air and is pumped back into the room. Both of these units generate a comparable amount of heat based upon my totally nonscientific method of sticking my hand into the exhaust.
Winner: Tie

DIRECTION OF EXHAUST: Both of these units draw air from the back and pump it out through the side. One notable difference is that Frigidaire throws it up at about 45 degree angle, resulting in a much better air circulation and, thus, much more uniform humidity level throughout the area. hOmeLabs, shoots the air straight out, which results in the much more intense air circulation around the floor. It also ends up not mixing the air as well in the overall area: after about 1.5 hr of operation, the humidity at knee level was ~40% (down from 65%), whereas near the ceiling was 50-55% (also, down from 65%), as measure by a network on AccuRite hydrometers. Eventually it does all mix however, but be ready for this disparity. Depending on what you want, this is could be a good or bad.
Winner: Tie

NOISE LEVEL: Both of these units are very comparable. My purely subjective perception is that Frigidaire is slightly louder. Measuring with sound meter and operating at Medium speed (Frigidaire) and Turbo (hOmeLabs), Frigidaire produces ~59dB at about a foot away from the front and hOmeLabs produces ~57dB. Frigidaire is quite noticeably louder at Hi speed (~65dB).
Winner: hOmeLabs

POWER CONSUMPTION: This is where thereâs a big difference. All draws are measured with P3 P4400 Kill A Watt appliance. hOmeLabs draws about 1W at idle (non-operating) and 560W operating at Turbo mode. Furthermore, every time it turns on thereâs a momentarily spike in current such that the lights momentarily flicker on the whole circuit. In comparison Frigidaire draws 0.4W at idle and 470W operating at Medium and 485W operating at Hi. It does not have any problems with momentary spikes at unit power on.
Winner: Frigidaire

CONCLUSION: While both of this units are very good and will get the job done, considering all of the above Iâm giving Frigidaire 5 stars (but really A-) and hOmeLabs 4 stars (but really B+). Hopefully youâll find this useful as you make your decision.

April 6, 2017
Size: 6 GallonVerified Purchase
OH my goodness. This dehumidifier looks sleek and works GREAT! It is very simple to use. The easiest setting is to just plug it in and walk away. It will pull water from the air until it’s full, then it will stop until you empty the water out. Slide the drawer back in and it instantly comes back on. The drawer that holds the water comes out easily and has a handy handle (see what I did there?) ; ) to carry it with. Very sturdy. For people who want it to run continuously, there is a setting where you can use a drain hose. You can also adjust the amount of humidity you want in the air. It’s a very quiet and attractive unit. For the first spring in 18 years my 120 year-old house doesn’t smell musty when it rains! (sorry the last two pics are sideways…couldn’t get my photos to cooperate)

Just as an aside, another review mentioned that the 70 pint version did not take a standard garden hose, but mine definitely does. Not sure what the issue was with theirs, but the outlet hole on the back is the same size.

Size: 6 GallonVerified Purchase
Wow! This machine is absolutely AMAZING!!! We live in the rainy, damp Pacific Northwest. We have a large sheet metal shop that is insulated, but the moisture, especially in the winter, is super high. We store many of our belongings in this building, including books and special memories of my kids (school work, art, etc.) that I always worry about getting ruined from the moisture. We finally agreed to get a dehumidifier and it is FANTASTIC!! This beautiful machine comes ready to unpack and get going. Simply turn it on and it starts doing its job. The humidity in our shop, according to the digital read out on the top started at 70%. Within a short amount of time it was dropping and we soon had it down to 60%, much more appropriate for living in. The bottom drawer that holds the collected moisture is easy to remove and empty. We are very entertained and impressed watching the water level rise as it does its quite work. While our house humidity is usually at a good level or low (we have to use humidifiers throughout our house during the winter!), this will be a fabulous helper in our damp, moist shop building that is not as protected from our damp climate as our house is. The machine is simple and classy looking, easy to store wherever you need it without it being a nuisance. It is super quiet and gives off a pleasant, steady white noise. I would love to have this in my house or bedroom if we needed to dehumidify. The top control center is easy to maneuver, giving you timing options and humidity level control. My husband insists that if they have Turbo mode, we should definitely use it because it must be the best, so we have had it in turbo mode and are so impressed with how quickly it works. In 36 hours of use we have already dumped the full basin container twice and it’s filling back up again. The dehumidifier includes wheels on the bottom of it, making it super easy to move around and easily useful wherever you need it.
This hOme dehumidifier is one of my favorite Amazon purchases ever! I love how wonderfully it works, while quietly minding its own business. I highly, highly recommend this machine for humid areas and wonder how I can bring it with me on vacation the next time I’m in Mexico in June, haha! We LOVE this machine and the impressive work it’s already done for us and strongly, strongly recommend it!