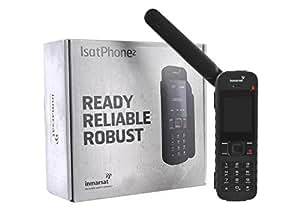 A robust handset, unrivalled battery life, excellent voice quality and the reliability you expect from the worldâs leading provider of mobile satellite communications â IsatPhone 2 delivers it all. The new-generation IsatPhone 2 joins IsatPhone Pro in our handheld satellite phone portfolio â bringing more choice to customers wanting the reliability Inmarsat delivers. IsatPhone 2 is a tough phone for a tough world. The robust handset has been engineered to cope with anything that nature can throw at it â from searing heat to icy blasts, desert sandstorms or monsoon rain. It offers unrivalled battery life â 8 hours of talk time and up to 160 hours on standby. Together, IsatPhone 2âs design and capabilities â including safety features â make it ideal for the most demanding of users in sectors such as civil government, oil and gas, NGOs, and media. The Standard Package includes: – IsatPhone 2 Handset – Battery – 2 Chargers: Main – 4 Adaptors / Car – 10-30 Volts – Micro USB Cable – Wired Hands-Free Headset – Free Travel Bag – Quick Start Guide – Holster – Support USB Memory Drive

Size: 0 Units (Blank Prepaid Sim)|Verified Purchase
I actually own 2 of these and a Globalstar phone also. Hands down the Inmarsat Isatphone 2 is a better phone and has better service than Globalstar, even after Globalstar launched its new satellites. I live in Southern CA and the Globalstar service is marginal at best. With the Isatphone 2 you just turn it on at it works, so far 100% of the time. The service plans are also very competitive with Globalstar. The Isatphone 2 phone itself costs more, but it is more solidly made and has more features. For instance, you can’t even SEND texts with the Globalstar, but you can with the Isatphone. And the Globalstar can only RECEIVE 32 characters of text max, while I believe the Isatphone can receive 160. The only advantage to the Globalstar is that you get US phone number. But I really bought a satellite phone to be able to call out, not receive calls. And the 2 way texting capability of the Isatphone more than makes up for anything else. The only reason I didn’t give it 5 stars is that sometimes when the lighted keypad goes dark, pressing any key doesn’t light it up again. There might be a specific key to press to do this though.
August 1, 2017
Size: 0 Units (Blank Prepaid Sim)
I purchased an Inmarsat Isatphone 2 for a sailing trip to the Bahamas, based upon it providing global coverage except for the poles. In fact, while the phone worked well in the Gulf of Mexico, it was unable to obtain any satellite signal in the North Atlantic or while we were in the Bahamas. I would not recommend purchasing this phone unless you can verify, from an actual user, that it will acquire a satellite and provide service at the location where you intend to use it. You should certainly not rely upon Inmarsat’s representation that it provides global coverage other than at the poles. It does not.
August 5, 2015
Size: 0 Units (Blank Prepaid Sim)|Verified Purchase
Ive had this phone for almost a year now. Phone was shipped from BlueCosmo and activation was straightforward online. It does take about 24 hours to activate (probably faster to call BC direct). The phone itself has been very reliable, Ive not had a dropped call after using in various locations across the US. Ive also not had any battery issues; the phone does drains minimally when stored for long periods in “off” mode (drops to approx 3/4 power over 4-month period). The phone has absolutely no problems connecting to satellites when outdoors. Indoors, it will sometimes connect if near a window (which is to be expected). Text messages and emails send and recieve reliably. I should mention that you can receive texts notifications when the antenna is down, however, you sometimes still have wait up to 15 minutes for the text to download (once the antenna is raised). Also, there is a weird quirk about incoming messages. Messages that have an “@” symbol in them will be cutoff after it appears. this results in an incomplete message that contain an @ character in it. Inmarsat prepay service plan is pretty economical. They do expire in 6 months but the units will roll over as long as you purchase another 6 month package before the first one expires. It costs about $200 a year to maintain, but you cant let the plan expire. Would recommend this phone for anyone who travels frequently outside of alaska and the poles. i like the modern look of the phone but would prefer if it were one inch shorter.

Size: 0 Units (Blank Prepaid Sim)|Verified Purchase
The phone works great and much cheaper than the roaming charges associated with a US cell phone while traveling in Europe. It works great in places where there is no cell reception.
May 7, 2015
Size: 0 Units (Blank Prepaid Sim)|Verified Purchase
Bought this phone for my son who works in West Texas on the oil rigs and could never get a cell phone to work. He has a new baby and his wife needed to be able to reach him. Works great, my son loves it and especially all the extra bells and whistles that it has. Needed to call Blue Cosmo one time for a simple question and they were great, helpful and polite. Highly recommend.

Size: 0 Units (Blank Prepaid Sim)|Verified Purchase
Bought the Inmarsat Isatphone 2 in January of 2016 based on lots of research and reviews and the quoted card cost of $100 for 100 units good for 6 months. My primary reason for getting the phone is potential emergency use in the backcountry. Just six months later, June 30, 2016, the cost of usage doubled when the $100 only gets you 90 days. I feel that I have been had, subject to a bait and switch where I paid the high up front cost for the phone and quickly thereafter had my usage fee double.

Size: 0 Units (Blank Prepaid Sim)|Verified Purchase
I received 2 copies of this phone with a hairline crack in the base supporting the antenna. This was reported as a defect in the manufacturing of this phone.
http://spacenews.com/inmarsat-finds-manufacturing-defect-in-isatphone-2-satellite-handsets/

I was hoping to get a fixed version of this phone in November, as I read it was reported to be resolved end of October.

Unfortunately this appears not to be the case with the replacement that I received. I will be returning both my Inmarsat phones.

Update 27/11/2015
After returning the 2 phones to Amazon, I ordered direct from a vendor (BlueCosmo). The phone appears to no longer have the hairline crack described. Firmware for the phone also appears to be updated to the latest (1.8.01). I will be travelling to Canada in December and will further test the phone. So far no problems with texting, or making calls.

November 20, 2014
Size: 0 Units (Blank Prepaid Sim)|Verified Purchase
OK…I had to return my first Isatphone 2 because after putting on a full charge and making sure the phone was off, I noticed that the battery was drained by 20% after 10 hours. I charged it again and DID NOT USE it only to discover that there was some type of battery drain. I contacted amazon and they refunded my card and i bought another one. Now, I see that the same problem is occurring. the battery is draining with no use. It might be a design flaw or need a new firm ware update. I will contact INMARSAT and update their response.