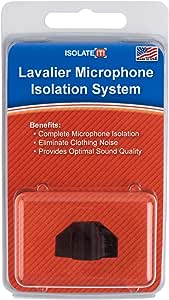 I have a couple of Audio Technica omni lavalier mics that tend to pick up a TON of rustle from the capsule, and a little from the cord. It was a super tight squeeze getting the capsules into these isolation thingies (I had to remove the tiny covers around the mic head, even), I was very surprised and impressed that once they were in there, the rustle was gone. Gone!

I used tape (also from Amazon) to secure the isolator to the inside of the talent’s clothing (in one case, to bare skin!) and used it as usual. Sound quality seemed the same to me, minus the visible mic (I had formerly been clipping them externally to clothing because of the rustle when placed beneath clothing).

The only caution is that these pads are relatively large, so if you’re going to use tape to stick them to something (especially skin), be aware of how much tape is necessary for a solid fit. Also consider making a cable loop, also taped to something else (like clothing) in case the talent accidentally pulls the cableâyou really don’t want this thing yanking off of somebody’s skin in the field without them feeling some obvious resistance (from the loop) first.

The Isolate IT is very well designed. It eliminated all clothing and body noise for mic capsule of my Sanken COS11-D. I ordered 3 more because I was so impressed.
My only disklikes is that because of it’s size it can’t be used with all types of clothing and I wish it came in other colors like skin tones or white. But other micing techniques can be used in these situations. It doesn’t eliminate cable noise issues further down the wire, but taping certain portions of the cable elimates that issue as usual.
I am giving it 5/5 because of how highly effective it is in the situations where it is applicable.

strong lav isolation system keeps the lav hidden and outside noise to a minimum. So far happy with this purchase.