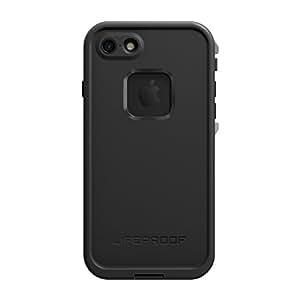 With LifeProof FRÄ for iPhone 7, youâre free to venture off the beaten path and come back with proof of your triumphs. WaterProof, DirtProof, SnowProof and DropProof, FRÄ braves the elements while blocking them from soaking circuits or clogging ports. Whatâs more, the integrated screen cover keeps your display pristine, and the custom design leaves every feature and function accessible.

Color: ASPHALT (BLACK/DARK GREY)|Verified Purchase
I just changed from an Otterbox Defender to the Lifeproof Fre, and I thought I would share some of my impressions and comparisons to the case I was using.

PROS:
* Case tested waterproof before I installed the phone, so it works.
* Case is slim and light in comparison to the Otterbox Defender.
* Button tactile feedback is good for the volume and sleep/wake buttons. My ringer/silent switch works just fine.
* No issues with the fingerprint sensor on the home button at all. Work just as good as with the case off.
* Touchscreen response is good – as good or maybe even slightly better than my Otterbox, where I would occasionally miss the spacebar and keys at that level, for some reason.
* I notice the slight elevation of the screen protector around the home button (as other reviews mention), but I don’t see that as an issue.
* Sound quality seems to be very good in the couple of phone calls and speakerphone calls I’ve made. I’ve asked – and no one has told me that I sound distant or muffled. Earpiece sound quality and speakerphone sound quality are both good. My last waterproof case was an older Lifeproof and they have definitely made an improvement here (based upon my limited testing). This was perhaps my most significant criteria for a waterproof case.

CONS:
* For some reason, it took me forever to get the case on without dust under the screen protector. I don’t know if it was some manufacturing debris or the included cloth, but there was always a piece or two of dust that annoyed me. I finally used some compressed air to blow off the phone and out of the case and got it debris-free.
* Screen protector does have some mild rainbows. Not the worst I’ve seen on a phone case.
* Screen protector is glossy, the one on my Otterbox Defender was a bit more matte. As a result, cannot see the screen at all from an angle when in bright lights (very reflective), must look dead-on. I usually keep my phone on my desk or the table at work to get a quick look at notifications that come in. With the Otterbox I could always see it from an angle at a distance; I’ve found I’ve had to pick up the phone to read with the Fre. I’ll be curious to see how it does in bright sun.
* Screen protector is somewhat wavy. Though it doesn’t affect the touch screen sensitivity, it does cause the display to look slightly distorted if you catch it at an angle.
* I had to open the case a few times to get the dust out from installation. Even using the enclosed “key” tool to do so, the plastic on the bottom right corner of the case got a little chewed up. I suppose this is like the first dent on a new car – over time the rest of the case will wear to match.
* The Fre is much more hard plastic, and less rubbery than the Otterbox, so it does tend to slip from my hands and slide on desks/tables a little more than the Otterbox. I prefer a rubbery case with more stiction.
* The case is slim and light in comparison to the Otterbox Defender. Though I highlighted this as a PRO – and it probably will be for most – the phone doesn’t feel as well protected as it did in the Otterbox. I’ve always been one to be OK with the larger size of a phone case if I felt it would give me a higher sense of security.

CONCERNS:
* I can’t say the charging port door will eventually fail, but it does seem like it will be a weak point at the hinge and the seal over time.
* The silent/ringer switch was the first piece to fail on my older Lifeproof and as this appears to be of the same design, I expect this will also be a potential place for the new Fre case to fail long before the phone is at end of useful life.
* The edge around the fingerprint sensor is a little sharp as it drops in to the recess. No issue functionally, but it might bother me over time.

Too early to say if I’m going to keep the Lifeproof over the Otterbox. My primary reason for switching was that dust and moisture were getting under the screen protector on the Otterbox – just from being in my pocket – based upon some of the work I do on a daily basis. I was removing it from the case every few days to clean it up. I like that I can potentially just run the Fre under the tap and wipe it off if it gets dirty, and not have to worry about sweat and dirt making its way so close to the phone. I’m going to give it some time before making a decision.

UPDATE (03/2017): I’ve stopped using the Fre for a while and went back to the Otterbox Defender with a glass screen protector. I was finding the Fre’s screen protector to be a little too glossy for good viewing. One issue I started to have with the Fre – the covering over the speaker ports at the front bottom seems to be peeling or wearing away. Everything else seemed to be holding up.

Color: ASPHALT (BLACK/DARK GREY)|Verified Purchase
This case is attractive and functional. I often work in dusty, dirty environments so just waterproof isn’t good enough. When I’m off I like to play by the ocean and a serious dunk in salt water is not the same as a splash of rain. This case keeps my iPhone safe from both sorts of hazards, not to mention that it also is less slippery than the naked phone, so it doesn’t tend to slide out of my pocket as I climb, bend, or crouch. You might not need one if you spend your days in an office or at home, but for an active outdoor lifestyle this is the number one case.

All of the touch screen functions work perfectly well, the sound is still excellent, the screen brightness is still good, the buttons all work properly, etc. I can’t say if the touch I.D. unlock is a little less sensitive… My index finger works fine but my thumb has required re-learning several times. I hear of others having similar problems without any case at all so maybe it is worse with this case, maybe it isn’t…but as I said my index finger works every time.

I have one thing to add: I had one of these for my iPhone 4 and though the case did its job well in the sort of environment I describe the screen on the case eventually became dulled and scratched. Because of that I learned the hard way to put a simple film-type screen protector onto the outside of the case’s screen. Just buy a film type screen protector (NOT a tempered glass screen protector) for whichever iPhone you have and the holes will line up in the right places on the LifeProof case for the camera, etc. Eventually the film will get ruined, and then just peel it off and put on a new one.

Watch out for the little “door” over the charging port. If it isn’t fully closed the door is vulnerable to leaks or breakage. If it breaks you are going to have to buy an entire new case. Fortunately it snaps shut securely, just be sure you check that it is snapped shut before dropping the phone in your pocket.

Color: EMBER RED (RACE RED/FLAME RED/LIGHT TEAL)|Verified Purchase
I should have known better then go fall for this item again! This is my THIRD lifeproof my first 2 I bought at AT&T. The very frist one did its job and simply got wore out as I am hard on phones. I bought my next one and it failed miserably. It was brand know and took it on vacation planing to use it near water. Moisture got into the case with just one dip in water to take a quick pic of my daughter and a dolphin. The phone was never submerged just in my hand and splashing once we got back on to ship I fully checked out my phone. The thin plastic shields near camera had been punctured, the phone was new but I felt maybe it was my doing. I eventually broke down and bought another here. Just a week after buy I dropped it in a sink. it was not submerged a second however again lots of moisture. My phone was not affected however this product advertises that the phone can be submerged IT CAN NOT.

BTW …. I did preform the test each time before I put my phone in and there was never any water found however I feel like once you phone is in the case the case is slightly comprised

Color: ASPHALT (BLACK/DARK GREY)|Verified Purchase
Shipped quickly, product as described. If you’re reading these, you want to know if it fits the iPhone 8…it does 🙂

Wish Lifeproof had not released an iPhone 8 case when it is the same as the 7 case.

Color: ASPHALT (BLACK/DARK GREY)|Verified Purchase
Thank goodness something changed. Lifeproof has always been great but designed so the Apple cord would fit precisely. Problem was the rest of the chinese crap aftermarket cords couldn’t manage to match apple’s plug size and wouldn’t fit. I complained for years about the aftermarket cords, especially the “heavy duty” ones. Someone that wants a rugged cord likely wants a rugged case of their phone. Well, problem solved. Lifeproof increased the hole for the charging cords so the extremely poorly designed aftermarket cords fit. Thanks again.