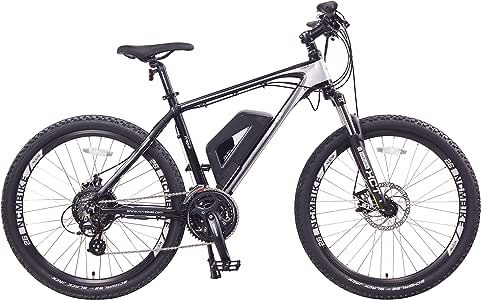 Reviewed in the United States on November 25, 2019

INCREDIBLE BUYER FIND: 5 years ago, individuals in Germany decided to create an ebike
(pedelec) around exceptional components, and itâs now being sold worldwide (Spain, Italy, France,
U.K., New Zealand, Australia, U.S.A.), resulting in a BMW style value & Volkswagen price. They
merged what appears to be “gold standard” elements: front forks w/adjustable shocks, Shimano
Derailleur gearing, disc brakes fore and aft, then made serious departures to hold costs to new levels.
The electronics, proprietary in scope, handle a variety of breakout facets: 1), Notice pedelec, as that
points to 6 PAS levels and an added bonus of full electric power-no peddle transport; 2), The
Panasonic cells assemblage is highly controlled; 3), The software running the chipsets/motherboard is
proprietary; 4) The rear-axle brushless motor/transfer, the heart of this vehicle, was expressly designed
to handle their entire line-up (from the cheapest model to their flagship offering), meaning it was
expressly and heavily over-engineered for utility. Then they applied their attitude to the frame (only
two spots are round: steering head & seat post tube), which are predominantly rectangular and curved,
also; 5) All machinery mounting flats are solid bar stock that is tig weld joined (no crushed tube to
create the mounting point); 6) They use powder coating rather than paint, due to it’s known seal
capability; 7) And the shipping carton is TRIPLEWALL (e/b/a flute merge: almost Â½ inch thick) as a
width opening FOL (full overlap), with applied solid plastic squares (pictures-3plcs) that prevent
transport damage, and three separate ethafoam constructions employed at the rear-wheel//at the
mid-point for the heavy charger & toolset supplied//above the steering head. Another example of their
mindset involves the mounting point/slot for the dismounted front tire: they created a force fed blowmolded
plastic capture piece for that value, ensuring that the downtube/fork ends don’t incur damage.
Jig welding the frame (sic, they produced almost 18,000 bikes during 2018), then powder coating, then
FULL ASSEMBLY–allowing complete testing: charged battery + peripheral USB charging port/outlet
check. Then off to shipping, partial dis-assembly: front tire alongside the frame, handlebar still with
components attached alongside the front forks, and with the tires holding pressure that eliminates tube
pinching from under inflation. IMAGINE THIS: Finding the frame and parts literally swaddled in
ethafoam wraps, individually tied to each particular frame part, and a grocery bag full of cushioning
removed. WOW. The carton showed NO DAMAGE, and assembly only required two allen wrenches
and the 15mm open end (part of the toolkit) to mount the solid aluminum CNC pedals, they having not
only reflectors fore and aft, but also incorporate protruding pegs for shoe/sole grip. After realizing that
there was no need for adjustment anywhere after my simple reassembly, the frame mounted Derailleur
Shield was then found. So the SEVEN POINTS of reference are intended to establish Leoncycle .com
is where to get a PDF manual if you want to see what is offered. It’s going to be fun owning this bike,
since I no longer drive: I’m a retired greybeard, literally. Given a fixed income, this kind of major
purchase had to be pointedly AIM investigated. It was, as shown by the in-depth values found and
expressed; and I feel like I ordered Vanilla Ice Cream, and the wait staff surprised me with added
“Rich-German-Chocolate-Syrup” as the topping. <grins> This bike has my personal seal of approval,
and periodic updates will occur as my experience with pedelec grows. GOOBER: Amazon = 9 years.

Mostly purchased for my hilly region (volcanic hills) whose make me sweet last 5 mins before entering office.
Got bike quite quickly: 4 days, well packed and protected. Assembling is quite easy, you do not need assembling help if you even were installing wheel on bike. All tools are included.
Quality is awesome, just nothing to complain. Wheels are quite fatter after my 700c but after few rides got used to it.
And with such power ended up to get trailer for kid and riding those steep hills without stopping (some steepest hills got me sweating but not stopping). If you plan to run on flat, power level 1,2 will fully eliminate your pedaling (no fat burning). That is really Mountain power to use in Mountain not on flat.

What I do not like is: seat (too narrow) and not adjustable steering wheel which is lower after my 700c.

I purchased the NCM Prague Electric Bike in July. It took a solid week for the bike to arrive from the West Coast to me on the East Coast. The box arrived and it was beat up from shipping.

I initially misread the box and thought the wrong item was shipped, but the customer service responded quickly and I discovered the correct item had arrived.

The item was removed from packing and after easy set up, I discovered one clip from the brake line was broken. The customer service team sent me a replacement part quickly.

After a week of use, I decided to add fenders to the bike and to add a new seat that is more cushioning and memory foam.

The bike is solidly built and fun to use. I live in the Adirondack Mountains and use the bike for on and off trail use.

The simple complaint is the derailer system needs to be adjusted, it does not keep gears on the high end and slips in the middle gear.

I am happy with my purchase and have put in over 100km on the bike within the first month.

This is the only electric bike I have ridden but I am very happy with my purchase so far. I weigh 200 lbs and got it going 17.8 MPH without pedaling. With petal assist 1-2 is more than enough for flat ground, or bump it up and fly up hills pretty effortlessly if you want.

I cannot believe how fabulous this bike is–totally fits my needs. The customer service is first rate as well. I’ve emailed them three times, twice pre-purchase and once just now (constructed the bike earlier today). They got back to me right away every time and were super accommodating.

The bike itself: so far my only constructive criticism is that it doesn’t need three chain rings. Two or maybe even one would do the trick and would also shave a bit off the weight. Not too heavy tho: when I removed the battery and placed it in my backpack, I was able to easily lift the bike onto the commuter train (which had four very steep steps). And I’m not some muscle-bound coed. I’m mid-50s and female.

This bike has a throttle! Totally forgot how fun a throttle could be! I can’t believe it has a front shock, a motor, battery, nice seat that I do not need to replace, Shimano parts, and serious get up and GO with SIX pedal-assist levels. It is quite powerful. I love love love it. This bike adds nicely to my collection of five. And if I had more room, I’d have even more bikes.