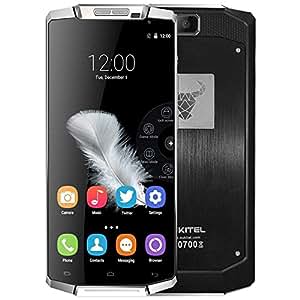 Color: Black
I decided it was time to ditch my iPhone, while the iPhone works well enough I always feel like I am being controlled and restricted at every move with limitations being there purely to monopolise my custom rather than to protect or give me greater control and donât even get me started on how bloated and unfriendly iTunes is.

I did a lot of research before purchasing this as there were several things I wanted/needed, I wanted a fast interface, plenty of memory with the ability to fit extra storage space with a micro SD card, finger print recognition a great feature on most new phones now, I wanted a good quality camera for video and snaps, decent battery life, I wanted something the same size as I already had as I am used to the screen size now (iphone 6), something that could be used with duel sim having an auto switch type feature so it would ring instantly on either sim, the Oukitel K6000 Plus had all this and anything else would be a bonus.

The phone arrived in a solid orange box well protected and already fitted with a rubber protective case, a USB adapter cable so I could plug in USB devices something I longed to do on the iphone but they wouldnât allow it, and charge cable with a myACT fast charger plug in a separate box with a UK plug, a basic manual, spare screen protector and a sim removal pin. The phone looks really sleek with an aluminium back and the front glass being ever so slightly bevelled towards the edges and around the same weight as an iPhone 6 maybe slightly heavier but hardly noticeable.

It was time to fire it up, the first start up took me through the setup all very easy to follow and a lot of options I just skipped as I would be adding them later and first wanted to give it a good test with the duel sim and using a micro SD card. The interface is really clear and very responsive and it hasnât been overloaded with apps so I didnât have to spend ages removing things I didnât use or would never use.

I have added a video running through the first start-up, adding two sims and testing them, adding a micro SD card and testing that by running a bit of video off it, I also tested a few other things and had to slightly speed the video up to get it down to the Amazon size limitations, please be aware the video quality often degrades considerable when uploaded through Amazonâs optimisation system but hopefully not too much. As a side note if you find the video wonât run as I often find then expand it to full size and start it then reduce the size again. I will also add some pictures and screen shots which often take a while to show.

I set up the Fingerprint Sensor very simple process and this not only works instantly itâs mega fast and I have yet to have a fail, you just have to rest your finger or thumb on the start button not press and thatâs it, I have set it up for both my thumbs which saves switching hands if you are holding it in your fingerprint hand.

I tested the cameras both front and back and am really pleased with the quality of both video and pictures, I really liked the clarity of the FHD (Full High Definition) screen, really sharp and crisp as was the playback quality of the video. The battery life is superb and is a welcome change from my iPhone which needs charging twice a day, the charging is nice and quick using a fast charger and you also have an estimated remaining battery life statistic in the settings.

What I liked
*************
– Very nice looking and designed phone
– Battery life is superb
– Great quality camera for both pictures and video
– Fingerprint sensor, not only a great feature but works flawlessly on this phone
– Very fast to charge
– Takes duel sims switching between them instantly
– Ability to expand the storage capacity with a micro SD card
– The price, I know I could have spent twice this but I wouldnât have got twice the phone, this zips through the menu and gives me all the speed and power I could need
– Nice simple menu with a bright clear screen

Summary
**********
This is my first Android phone and I am delighted with it, I have not gone into technical details as they are listed and for myself the real reality is how it stacks up when you use it and I find this phone superb, flying through the menuâs and applications, switches between sim cards flawlessly when you get a phone call and not constantly having to be on charge, for all these reasons I have given it five stars. If you have any questions please feel free to ask I will do my best to answer.