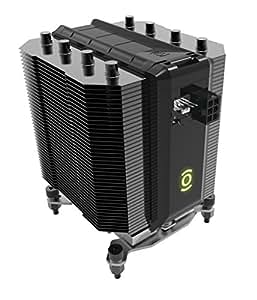 HEX 2.0 is a Smart CPU cooler that delivers exceptional on-demand cooling performance and thermal control to meet your computing and gaming needs. The HEX 2.0 is comprised of a proprietary state-of-the art High performance thermoelectric module, combined with an innovative heat exchanger design. The compact design of the HEX 2.0 allows it to comfortably fit into small systems-such as mini-itx-while delivering cooling capacity beyond that of much larger coolers. The active/passive design of the HEX 2.0 minimizes impact on system level power consumption with variable control managed by on-board Smart electronics. Furthermore, the HEX 2.0 provides CPU cooling requiring zero power consumption when the CPU is under low stress, up to a peak power of 35 watts when the CPU is heating up. Hook up the HEX 2.0 to your motherboard using the optional USB interface and unlock custom power Maps, LED configurations, and more.

December 23, 2016
Verified Purchase
This cools down my i7-6700k pretty well. Getting avg. ambient temperature of 28Â°C and between 35-50Â°C depending on the load when gaming.

-The mounting brackets are very sturdy, and was very easy to install. The modular design of the housing lets you swap out the fan if you ever need to change it.

-Runs silent for the most part. When under heavy load the fan is probably the most noticeable noise, but still relatively quiet.

-LED Light is ok. It adds some ambient light to the inside of your case, but isn’t very strong.

-The UI in the software is super simple and clean. I almost wish some of the settings and stats were a little more detailed. Lots of room for Phononic to iterate on since it’s so minimal.

Notes:
It is best to orient this cooler vertically for optimal performance (the vertical alignment could be switched). Make sure the airflow arrow on the fan matches the direction inside of the Heatsink airflow symbol. I believe mine didn’t match up when I first opened it.

Verified Purchase
I first noticed this cooler while looking through benchmarks. I had to google it because it wasn’t something well known and a brand and name I was familiar with. Naturally it came as a surprise that it was a HSF with a thermoelectric function to actively pull heat from the cpu. I’ve heard about them prior, but the difference was the performance associated with this particular cooler. It was always near the top of all cooling configurations (not including custom loops), competing even against AIOs with both 120mm and 240mm rads.

On paper it was impressive. So i decided to take a leap of faith and try this cooler out, it was a difficult choice especially at this price point. But i dont mind paying a little more, so long as the product works and is essentially worth the time and effort. And I can clearly say that I was not disappointed in the overall assessment of this cooler.

I won’t delve too much into the performance because it is there. The Hex 2.0 does it’s job wonderfully, it even has an app that allows you to control the Phononic LED colors which are RGB as well as allowing you to set your cooling preference.

With that said there are a few things to note.

The 92mm pwm fan that it comes with can get loud. I replaced this with a silent equivalent and have noticed a major decrease in fan noise maintaining the same performance. If you are overclocking on this you will definitely want to replace it.

It needs it’s own 6 pin and also needs to be connected via micro usb to have full rgb control. That’s more cables than I would like but it is doable.

The screw driver included is too short. I used a screwdriver that i received from a Noctua purchase, but will be purchasing a slim one for future use, so don’t bash me too much on this quirk.

Not enough RGB. The logo itself is about the size of a dime and I would like to have seen some of plastic fan shroud be included in that. Also, the fan shroud can be a bit awkward. My first thought was that it could be better imrpoved to provide a smooth open and closing function.

Do I regret my purchase and is it worth the investment?

I definitely do not regret my purchase.
This product, while not revolutionary, is one of the best in it’s class. It’s compact size is perfect for mini itx builds. It works as advertised and is much easier to mount than other coolers. It looks sleek, it’s built well with a few minor future improvements, and I can see it lasting for years. It will probably be the last cooler I will buy for quite some time as it has a smaller overall footprint than AIOs, while maintaining similar cooling power. Other tower or SFF coolers will not be able to reproduce the cooling results the Hex 2.0 provides.

Some of you may be on the fence about buying a cooler now that AM4 is right around the corner, but I assure you that Phononic will support the new platform. I have emailed and received a response from Phononic, regarding this and it will be available in a matter of weeks. Whether it will be provided for free with proof of purchase or sold as a separate product I do not know. I may send a follow up e-mail to get an answer to this. I have seen Noctua selling their AM4 brackets separately on Amazon for about $8.

This cooler has performed and exceeded my expectations and I am looking forward to seeing what other products Phononic will bring to the competition.

If you need a small cooler with similar performance to liquid cooler alternatives, this is the product.

Verified Purchase
Works okay, keeps chip cool Sorta. Took multiple attempts to get the cooler seated correctly on the chip. I had to apply force with my hand in one direction to the cooler while screwing it down to the chip/ board otherwise it would lean by an 1/8th of an inch rendering it useless. I was one more try of returning it. Been building computers from over 15 years, never had this much difficulty (including installing water coolers) in trying to get this seated correctly over the chip. Don’t want to take it off now as its the only thing I have now to cool my 7600k.

——Update——–
Phononic Support Team as been Wonderful. Was shipped a brand new cooler in almost overnight. The new cooler works wonderfully. No fitment issues sat correctly on the chip and wow does it cool. I am seeing temps under what my older water cooler was able to do before it leaked all over my board.

I can’t stress how good the support team has been. It is very hard to come by a company the responds so quickly and actually listens to their customers when they have problems. They were very attentive and responded less than 6 hours from my first request.I can’t say enough about this cooler. I honestly would recommend it to anyone looking to have an alternative to water cooling. The performance is astounding, however the support and team behind Phononic solidifies this being worthy every single penny. I have and will continue to recommend this cooler to all friends and family.

Verified Purchase
Here I am thinking I would get only a couple degrees difference… NOO!

Being a computer tech I had to read the instructions…
BUT it was easy to put on!

CONS:
I very much dislike that it sits and puts pressure on the caps and mosfets right by the CPU.
The wires are hard to move if you have small case

Check out those temperatures in the photos I have uploaded!

November 16, 2016
Verified Purchase
Great cooler!! I happen to live in the same town where this company is based and found out about this cooler through an engineer friend of mine who knows that I love to build computers. I had not heard of Thermoelectric Cooling before this (I’ve always used straight air or water) but after doing some research online I decided to take the plunge. I’ve only had it installed for a day but so far I am very impressed. Hats off to Phononic for making a great compact HSF that can keep up with much more expensive watercooling loops with a much lower price tag.

Verified Purchase
Installed 12/28/16 on MSI Wind with LG1155 chipset. Replaced a water cooler, Antec Kuhler h20 650 that was loud. Fired it up and it’s quiet and cooling on default settings. So far I’m very pleased.
—
Update 1/3/17
Nearly silent… Often times little to no ‘cooling power’ is required. Very pleased with this purchase.