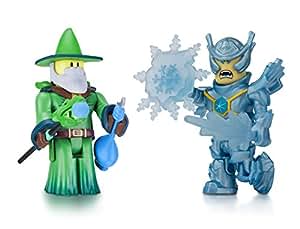 Emerald Dragon Master
One medieval Robloxian legend tells the tale of a remarkable wizard, who, after spending several decades grooming his magnificent beard, felt it was finally time to put his magical abilities to better use protecting his homeland from malevolent dragons. Fashioned from the scales of the immortal Emerald Dragon itself, his enchanted staff is used to tame the mightiest Robloxian beasts.

Frost Guard General
A battle-hardened warfighter who has the ability to manipulate moisture in the air to craft extremely dense weapons and armor that are as cold as…well, ice. His clan was almost unwillingly embroiled in the great Korbloxian War, but he was able to prevent greater conflict by summoning a permanent ice barricade to prevent enemy troops from further invading his land in the north.