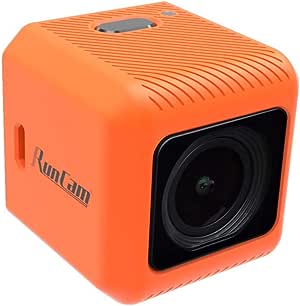 Since the reviews for different items seem to be mixed together, I would like to clarify that I am reviewing the RunCam 3s action camera.

Firstly, I was blown away by the quality of the picture for the price I paid. Video is very nice at 1080p/60fps and I have been able to get some very nice recordings of my flights. The WDR is relatively quick to respond to changes in light and can pick up images easily on a cloudy day.

There is no LCD on the camera unlike the GoPro Session series, so it’s hard to tell what function or attribute you are changing with the two buttons on the outside. There are two status indicator LEDs as well that are supposed to show you what menu you are in. To be honest, I didn’t bother with changing settings that way.

The RunCam app for smartphones is what you can use to change settings on the camera – which at first seems very convenient. However, the app would crash the first time I launched it after a period of time, and it shuts off your mobile data and disconnects your WiFi from the internet. Not a huge deal in reality but still a bit annoying. There are plenty of settings that you can change in the app such as contrast, light gain, WDR settings, etc – a lot like your standard FPV camera.

Finally, my biggest complaint. The battery life of this camera is absolutely terrible. I can record between 8 and 15 minutes of flight before my camera runs out of juice. Luckily, it looks as if it is able to save the current recording if it runs out of power, but it’s frustrating that I can only record so much before I have to recharge – especially since it takes between 1 and 2 hours to charge fully. I suppose you could purchase more batteries and charge them up beforehand, but my old original GoPro Hero Session’s battery lasted at least an hour before going kupoot.

There are some things that I really like about this camera (most notably the picture quality and relatively low price), but it just doesn’t compare with the GoPro Hero Session series that it was clearly contesting.

Edit: Also, the manual states that this camera supports up to a 64GB class 10 Micro-SD card, but my camera wouldn’t recognize the two 64GB cards I tried. I ended up having to use a 32GB card instead.

Good picture, I especially like the stepping zoom function, and it doesn’t seem to lose resolution on zoom either. My educated guess is, the CMOS chip provides better than 800tvl to the processing unit, and the zoom stepping is committed on a pre-processing basis.

I am piping 16+ into the unit off a 4S system, and this sucker gets HOT standing still. I do hope that’s not going to be an issue in the future, especially with the polyethylene canopy on my foam plane. We will see! I may design and FDM print a new canopy with this camera in mind.

Overall, given I haven’t flown my plane yet, let alone with FPV, from what I saw on the bench, this camera looks great! I bought it because Oscar Liang put it on his review list as having the best picture for a CMOS camera without any “jello”. I do not forsee any issues.

We mounted this on a large, tracked robot. With every bump, the transmission would cut out, but quickly returned. It lasted for about 4 hours of driving before failing. It got incredibly hot and then the signal was intermittent. Finally, it just failed. I suspect there was a cold solder joint that had a lot of resistance. That probably was the source of the dropouts and probably led to the extra heating until the joint failed.

The lesson learned here is to not wait for months before thoroughly testing it — test it while you can still return it.

This is a great fpv camera. I used it to replace a stock one from a space wolf and wow is the picture better. Bigger lens than I’m used to but it works fine. Something to pay attention to when buying for a tight build.

Pros:
-It’s small like a micro but quality of a bigger one.
-Easy to use interface for settings
-stock settings ok
-ships fast from seller

Cons:
-stock settings ok (not long to get the picture looking nice)
-lens is bigger than most micro cameras (I know when buying)

Awesome quality camera. The DVR doesn’t do it justice. In the goggles it is killer. The lens on it is kind of huge for small builds though (<3″). I have mine barely squeezed into an iFlight 2.5″ frame after I dremeled some carbon and some aluminum risers to make it fit. But the fitting problems are balanced by the sweet image. Get one.

Super camera indeed. You will need to adjust to the digital image but it’s doing a better job than other cameras on the market.
I have Sparrow 2 and this Eagle, shadows are more rich with this camera but digital noise included. I prefer to see the shadows and suffer a bit from the quality.

For me, all things equal, ease of installation on the frame is important. This camera comes with nothing that help in this, compare this to Caddex which has better specs and comes with everything you need and more…I’d go for Caddex next time!

great micro camera. fit it to the leader120 for a night time neighborhood cruiser. awesome. will purchase another eventually. room for improvement in weight reduction, and price reduction. maybe add a mic. they are also slightly bigger than my other micro cameras so installing it may pose some challenges.