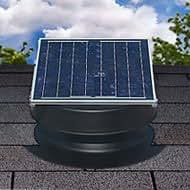 Solar Attic Fans are easily installed on pitched Fiberglass-Asphalt Shingle roofs and are a great product for proper attic ventilation. Natural Light brand solar attic fans are top rated by builders and are of the highest quality built in the USA. The DC motor is powered by the included 36-watt solar panel with the attic fan motor moving hot air and moisture out of the attic space everyday. Solar panel is adjustable from flat up to 45 degree angle.. Solar Attic Fans mount on 3/12 to 12/12 pitch roofs. (this unit is not for flat roofs or side wall mounting – Flat roof mount models are available). Moves up to 1628 cubic feet per minute. Use one attic ventilation fan for every 2625 square feet of attic space. Note: Optional Thermostats and Fire Safety Switches are sold separately. For installations on Tile roofs optional Turret extension and Tile Roof Flashing kits are sold separately. Made in USA.

Verified Purchase
I received the unit faster than stated with no special request for fast delivery. The unit was packaged very well and well protected. Installation instructions were very clear with no surprises. From start (unpacking, setup including ladder, cutting hole, installation, caulking and cleanup) to finish took 53 minutes so less than an hour. I also purchased the optional thermal snap switch & fire safety cutout switch that was not included in the unit price. The two switches plugged into the unit using male/female spade connectors which were already attached – less than a minute to install and plugged them in prior to carrying the unit to the roof. I did cover the solar panel with a piece of cardboard to protect it while climbing the ladder and carrying it to the point of installation. I marked, cut the hole and prepared the opening in the roof (so the flashing would slide under the shingles by removing some of the nails) prior to carrying the unit up and screwing it in place. The supplied caulk is more than enough to do the job but be sure to bring a rag with to wipe your fingers. I like a smooth finish and my fingers seem to do the best job. All in all – easy installation, the unit started working as soon as I removed the cardboard shield on an overcast day. I would definitely recommend this product.

Verified Purchase
SUMMARY: It was really hard finding any actual/objective numbers on the temperature decrease from an attic fan installation. Most people would write something like “it definitely FEELS better” but that was too subjective for me. So I created this review with some actual before-and-after numbers so that one can be better informed about a fan’s potential temperature reduction. This fan cooled my attic by an average of 6 degrees (may not sound like much of a drop but keep reading for the reasons why). Note that my attic temps, prior to installing the fan, weren’t as hot as others have reported (I’ve read that some people’s attics get to 140+ degrees!). I guess my attic’s temp wasn’t that high after all. The difference between my attic’s daily peak temp and the outdoor’s peak temp, was in fact lowered after the fan was installed. All of my “geeky” details are below along with before and after temp data I charted.

NOTES & MY LEARNINGS FIRST: I live in an 18 year old, two story 3300 SF home with gray, flat CONCRETE tiles on the roof, in Cupertino, CA (zip 95014). My attic’s volume is ~1500 SF. Installation was done in July ’16 by myself. Fan comes on around 10-11am daily when the attic temp reaches 80 degrees. After sunset, it intermittently cycles for 15 mins every hour until the wee hours of the morning and the attic’s temp drops to the 60s overnight. Once the temp drops to 77 degrees, the thermostat no longer has the fan cycle. Relative humidity in our attic ranges from 20% to 30% depending on the time of day. Attic temp peaks between 4-5pm daily (July/Aug). If I keep the attic access door in our hallway open and open up the upstairs windows all day, I can drop the attic’s daily peak temperature by another 3 degrees, which is how I know our attic can benefit from more intake vents.

Through measuring my attic’s temperature hourly throughout the day, I confirmed that my attic remains hot for hours after the sun sets. This may be true for most attics. Here in the Cupertino, we don’t have that many days above 95 degrees, but our 2nd story bedrooms can remain hot on the 95+ degrees hottest days until 10pm. In the pictures are the net temperature differences in my attic before and after the fan installation. Before that though, here’s what I did to modify my solar fan to continue cooling after sunset…

This fan is great, but I wanted more!
Natural Light’s 36 watt solar attic fan (model SAF36B-FL) doesn’t have a feature that I really wanted….a way to have it continue cooling my attic even after the sun goes down. (I thought I’d have to make my own circuitry to do that.) I really like that unique feature of the US Sunlight fans using their optional Solar Control (model #SC20), so I bought both and made some easy wiring modifications to make them work together. I preferred the Natural Light fan due to its high Amazon rating but also wanted the other company’s “cool” functionality (see what I did there?) of their Solar Control. It switches between solar power and AC power depending on sunlight availability (after sun sets), has a remote control for the fan (always on or thermostat controlled), and a remote LCD display showing attic temp/humidity. At first, I wasn’t sure if they’d work together, but after doing it, I now know it works and I have the best of both worlds…it’s now perfect for my needs! =) I’ll share how I did it:

Re-wire the fan so that the Solar Control acts like a thermostat. Instead of having the red/black wires from the fan’s solar panel going straight to the motor, I have them going to the Solar Control instead. The wiring connectors had to be cut and spliced (cut off the spade plugs and solder the wires on to the Solar Control’s cables), but that’s all it took! 10 mins and done!

Here are some things that weren’t documented anywhere but I discovered them during my project. They’ll help you should you want to do this too:
* The Natural Light 35 watt solar attic fan’s solar panel’s output is 20 volts DC. With full sunlight, the fan motor draws 1.8 amps. (36 watts = 20 VDC x 1.8 amps)
* I purposefully bought the bigger model fan (36 watts) since my attic has multiple levels/pockets of air, figuring I’m less likely to have buyer’s remorse if the purchased fan is too strong. I can easily slow down the fan speed by covering up a portion of the solar panel. Slowing down the motor by shading a small portion of the solar panel works perfectly.
* It turns out that covering up only ~5% of the panel from sunlight results in the fan RPM slowing down to roughly 2/3 speed….perfect if one wants to “dial in” the right amount of attic suction without creating a negative pressure in there. The voltage/current draw is reduced accordingly.
* The Solar Control outputs 18 VDC to the fan, so I had a pretty good sense pre-purchase that they’d work together despite US Sunlight telling me that their device works only with their fans (both devices’ operating voltages are within acceptable/compatible range of each other). Whether at the full 20 VDC output of the panels or at a reduced voltage, the two work fine together.

TEMPERATURE DIFFERENCES BEFORE AND AFTER THE FAN INSTALLATION:
I recorded the daily PEAK attic and outside temperatures so that I could see how much the fan is helping. I wanted to know the “baseline” temperature before so that I could justify the cost and effort. Attached is a screen shot of the chart I created, but basically, the fan dropped my attic temperature by an average of 6 degrees on days that had a varied outside temperature of 76 to 91 degrees. I’m happy that the fan helps keep our attic cooler, but I have to say that it would have been hard to know for sure w/out taking before-and-after measurements.

I’m concluding that some online reviews of “…house feels cooler…” may contain some wishful thinking (avoiding post purchase cognitive dissonance–there, I used that term I learned way back in college!) Your mileage may vary so don’t expect a single fan installation to make your house cooler necessarily. I do not regret buying and installing this fan, because I learned A TON about attics, roofs, temp patterns, etc from the experience.

I should note that prior to installing this fan, my attic did not have ANY exhaust vents–a pro roofer discovered this while giving me a fan estimate and told me the builder probably actually forgot! My attic temp drop would be 9 degrees (additional 3 degrees drop) if my attic had adequate intake vents.

April 19, 2016
Verified Purchase
I purchased this fan back in January after reading a solar power for dummies book and looking at a few websites on the internet about ways to reduce your electricity bill. My wife is home during the day and the kids are going to be home from June-September on summer break and the upstairs of my house gets really hot during the summer months (in the Bahamas). I was hesitant installing this fan myself because I did not want any leaks in my roof after the install but I must say that I am happy I decided to borrow a reciprocating saw from a friend and follow the easy to understand instructions that came with the fan. I was amazed by how much cooler the upstairs bedrooms are now since installing this fan. The hotter the sun is, the more this fan blows and I can actually go into my attic during the middle of the day and not sweat after 5 minutes. I can sleep in any room upstairs during the day and don’t need to turn on a fan much less air conditioning. It really keeps the house very cool during the day. I am sure my electricity bill will be almost as low as the winter months, definitely not as high as it was before I installed the fan. everyone that has homes in hot countries should get one of these. Its worth every penny and i am sure it would pay for itself in lower electricity bills over the next few months.

Verified Purchase
OMG why is it that I am just now finding about these things. I have a house in Africa, light company never gives us power and the heat can be much. In the house I have A/C in my room and when I come out of there the heat from the rest of the house is enough to melt you. Soooo I was telling a friend of mine how I had to do something about the heat they told me about a solar attic fan. I have dealt with solar before and was not impressed the cost at a little over 400$ to me is a LOT!!!
But since was Amazon if it did not work as described I could get my money back, plus the thing has a 25 year warranty.

Within 15 minutes of the fan being turn on, the house temperature went from 95 to 76. I am still doing the happy dance. This thing is the greatest. I LOVE it.