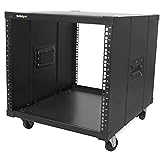 (35)
17% Off (as of August 11, 2022 11:02 GMT -04:00 - More infoProduct prices and availability are accurate as of the date/time indicated and are subject to change. Any price and availability information displayed on [relevant Amazon Site(s), as applicable] at the time of purchase will apply to the purchase of this product.)
TAA COMPLIANT: This TAA compliant 4 post open frame rack adheres to the requirements of the US Federal Trade Agreements Act (TAA), allowing government GSA Schedule purchases. MAXIMUM PORTABILITY: With built-in handles and four swiveling casters, this... read more 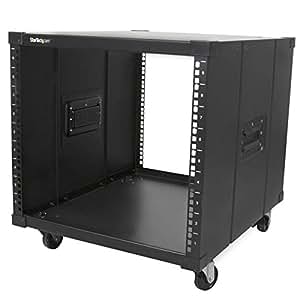 Store your servers, network and telecommunications equipment in a portable, rolling server rack – This 9U portable server rack lets you store your server, network and telecommunications equipmentÂ in a sturdy mobile rack that has a fixed depth ofÂ 23 inches.Â This TAA compliant product adheres to the requirements of the US Federal Trade Agreements Act (TAA), allowing government GSA Schedule purchases. Portable design With built-in handles and four swivelingÂ casters, this mobile rack is easy to transport around your server room, officeÂ or studio. Its increased mobility makes this cabinet the ideal solution for telecommunication racks that needÂ to interface with different equipment around your workspace. Durable construction The server rack features heavy-gauge mounting rails to ensure a stable installation platform.Â This durable 4-post rack supports a static loading capacity of up to 220 lb (99.8 kg), and is compliant with several industry rack standards (EIA/ECA-310, IEC 60297, DIN 41494), providing a universal design that’s compatible with most rack equipment. Fast assembly Save time and hassle with a rack that’s easy to put together. With its easy four-step assembly process, you can set this portable rack up in minutes.Â  The RK960CP is backed by a 2-year StarTech.com warranty and free lifetime technical support.

Verified Purchase
Very sturdy, does what it is supposed to. Double check your device dimensions though, as you can’t mount some rack mount servers with this. It’s not deep enough.

Verified Purchase
I am using this rack without the wheels, so I do not consider them in the review. It came in pieces, in a relatively flat box. It was fairly quick and easy to assemble. Using it without the wheels is as simple as not installing them, though there are still mounting plates on the bottom panel that add a little to the thickness of that panel where the wheels would mount.

I have this set up as a ‘permanent’ installation for a power backup and distribution system. It is just large enough to hold everything involved, and it is convenient to move that stuff to a rack mount model instead of just stacking them.

I would have liked it to waste a little less space on top/bottom (a bit more than an inch from the outside top to the top of the upper 1U, and a bit more than an inch from the outside bottom (less wheels) to the bottom of the lower 1U). Where I have it, using the top 1U is not possible. If it wasted a half inch less to the top and bottom, it would have fit well enough to give me that extra space for expansion. I think they could have done this but it might have meant slightly more complicated shape or thicker plate for the top and bottom pieces. I would like to take of half a star for this, but Amazon only allows full stars.

It is fairly heavy when assembled, but not really heavier than expected. Fully loaded, the handles seem more of a convenient way to pull it around (assuming you use the wheels) than a safe way to pick it up (the power system I have loaded in it pushes pretty close to the manufacturer’s stated weight limit for the rack). I can’t imagine picking up my setup without at least four people; two handles isn’t going to do it. Since my setup is not meant to be moved, though, it’s not a big deal. With the handles recessed, at least they don’t stick out and get in the way of other things.

Overall I’d consider this about 9 of 10.

February 23, 2016
We were looking for an additional rack to complement our AV system, when I was offered this item for review. However we usually prefer wall mounted ones for easier access, and did not realize this did not offer any kind of wall mount capability before I received it.

This is the first (small) rack I was without any wall mount options. Also our previous racks have a “double” kind of wall, where the vertical mounting rail is inside the actual enclose, leaving rooms on the sides for cable routing. Here, the only option is using the open back side for all the cables, which is a limiting factor. I’m dropping a star from my review because of these two reasons.

Otherwise it is a well built sturdy standard 19in rack, with 9U capability, and 23 in depth, which should be enough for most small studio equipment. And Amazon carries several long drawer options to keep mics, cables, and batteries inside. Our longest equipment is the power amplifier, and this rack is long enough to carry it. It also offers enough weight capacity, even when supported with coasters. So there is still usable benefits from this rack enclosure.

February 16, 2016
This is just a great server rack. Made of very durable construction, this card holds everything for our server and telecommunications needs in one simple, self-contained portable rolling rack.

The built in handles and excellent swiveling casters make this an extremely useful rack that stores nicely in a utilitarian server room in the office.

It was very easy to assemble and an attractive finished product resulted.

As it holds up to 1200 pounds, that’s more than most will ever need.

We are very pleased with this rack and if the need arises, will definitely buy another.

(35)
17% Off (as of August 11, 2022 11:02 GMT -04:00 - More infoProduct prices and availability are accurate as of the date/time indicated and are subject to change. Any price and availability information displayed on [relevant Amazon Site(s), as applicable] at the time of purchase will apply to the purchase of this product.)
TAA COMPLIANT: This TAA compliant 4 post open frame rack adheres to the requirements of the US Federal Trade Agreements Act (TAA), allowing government GSA Schedule purchases. MAXIMUM PORTABILITY: With built-in handles and four swiveling casters, this... read more