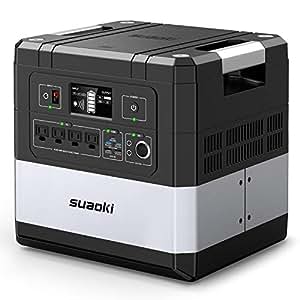 Verified Purchase
I purchased this power bank for two main reasons, one is for power outage emergencies and the second is for camping. This is the biggest power bank Suaoki offers and has a whopping 1182.72 Wh. This is plenty of juice to power a lot of devices, 12 outputs, including 4x 1000W AC, 3x 120W DC, 4x Rapid charging USB ports, and a 60WPD, Can power at least (without splitters) 12 devices at the same time.
The nice part about this power bank is that you can use it and charge it at the same time without damaging the battery, I tried and works well. This is good, especially when charging while camping from solar panels, additionally, you can charge it from car 12V cigarette lighter. From what I read you can cycle over 2000 times over 10 years and has excellent stability and safety.
To test its efficiency I plugged in a 200W heater, a saw, grinder and run all at the same time, no issues at all. This power bank is a must-have, especially with all the power outage. I made a video to show its capabilities.

I got this as part of the Indiegogo pre-launch campaign and I’m very happy with the purchase. I know it will be solid for emergency situations, but more generally I was planning to use it for remote A/V productions. I’ve been able to run a full PA/Mic/Amp setup off of it for over 3 hours (didn’t drain completely). I don’t know how long it would run them, but I got it to power up 2 lights from a Lowell video broadcast lighting kit. I was surprised they even came on. The “biggest one” wouldn’t run with another – but even if you needed 3 of these to power 3 lights in the middle of the desert – that would be pretty impressive.

I’ll update again as I use it more, but so far, I like it quite a bit.

Verified Purchase
First off, this thing is heavy, 52 lbs according to my scale (see image), so just be aware for that when buying. There are two handles on top that make it very easy to move around. This thing has an insane amount of power, it just keeps going and going. I love that it works as a UPS as well, when it it’s not out being used, I have my modem, router, TV, and PS4 attached to it for short downtimes without out power. With the UPS, the power station smoothly transitions from power to the battery to keep everything up and running. There are plenty of output options, I have attached photos of them all. In the video you can see the ability to individually control different output types. This is a great feature, as turning off different outputs helps conserve as much battery power as possible.

This thing is fairly rugged, and I foresee it enduring mnay camping trips. It powers my car fridge (IndelB with a danfross compressor) with ease. Don’t have to worry about the car battery of the fridge going out anymore. Because of the compartment on top, you would need to be careful standing or stacking on top of it, as the lid creates a bit of a weak point. That being said, the storage compartment is fantastic, I know I would lose cables otherwise. I also have sat on it, and stood on it carefully with no problems.

The biggest downside is the fact that it can handle input of only 150W of solar power at a time. This means my 300W panel I already have really only is being used to half it’s capacity, charging more slowly than if it could charge at 300W. The included cable makes it super easy to hook it up to a panel. One other downside is the lack of a DC power cable included for input to charge this. It would be nice to have one included for the price that is being paid for it.