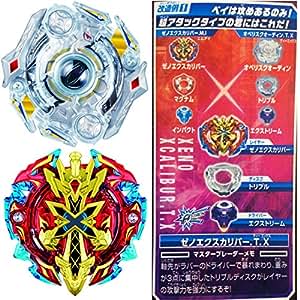 Beyblade is a brand name for a line of spinning top toys originally developed and manufactured by Takara Tomy, first released in 2000. They include a launching device with a ripcord to help make the top climb to maximum speed. Players eject their tops into a plastic arena where they strike each other. The last top left spinning is the victor. The main premise of the Beyblade series is customizable, with interchangeable parts. Both the toys and their name were inspired by “Beigoma”, a traditional spinning top. The introduction of the toy corresponded with the broadcast of the Beyblade anime television series of the same name. In 2001, the series was licensed by Korean toy maker Sonokong. In 2002, Hasbro began to sell Beyblade toys internationally (under license from, and produced by, Takara) along with a coordinated country-by-country release of localized versions of the TV series. In August 2008, Takara Tomy released Beyblade: Metal Fusion; the first incarnation of the toy in three and a half years. The series was followed up in 2015 with Beyblade: Burst. [Company information] Takara Tomy Company, Ltd. is a Japanese entertainment company that makes children’s toys and merchandise. It was created from a merger on 1 March 2006 of two companies: Tomy (founded in 1924 as Tomiyama, changing the name to Tomy in 1963) and Takara (founded in 1955.)