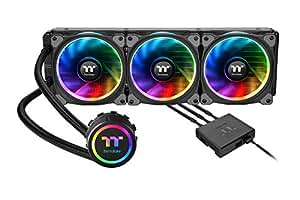 Scored 97/100 according to Tweaktown

“The Thermaltake Floe Riing 360 TT Premium RGB AIO Cooler is a top tier product, which attempts to deliver everything possible, and does a damn fine job with what is offered.” – Tweaktown

“If we were on the hunt for a new AIO, our money would be going to Thermaltake and this round of AIO’s. There just isn’t anything better on the market right now.” – Tweaktown

January 27, 2018
Style Name: Floe|Size: 280mm|Verified Purchase
UPDATE: The software continues to crash during boot, after an update to fix issues that were not even on the list of things broken… What are you doing Thermaltake? Sometimes it works and sometimes not – GAH! Sometimes my fans make up their own mind what to doNext month I think I am going to replace this with a different cooler. Actually the only reason for going liquid was NOT cooling but decibels and excitement factor. At this point I think I am going back to hard pipe cooling. This liquid CLS-AIO is for the birds. As far as I can tell Liquid cooling is for bragging rights – not technically needed for thermal management. I am disappointed. I know I got ripped off by the misrepresentation of the product.

HISTORY: My system build starts with an AMD 1920X on a Gigabyte Designare X399 Mo-Bo. With the latest bios update. The system is stable with G. Skill RGB 3200 ram. I have implanted an NVMe Pci-e Samsung EVO 960 drive and power from a Corsair RM850i – the non RGB version of their power supply. All of this is a vanilla system with NO overclocking and a stable OS, viewed on a Sceptre UHD monitor.

THE COOLER: One of the recommended cooler manufacturers for this processor, on AMD’s website, was Thermaltake closed loop AIO coolers. I chose this cooler on recommendation from Thermaltake and the lighting ability of it. I was not convinced of its efficacy for the first 48 hours after the install. I almost took it out because of temperature control issues. 71C to be exact, and BSODs every 20 minutes.
Suspecting the Tt software controller was to blame, I reinstalled the awful stuff.

THE SOFTWARE: this interface is just idiotic. Great idea – childish implementation. It is alpha software at best. I played around with it and noticed that – though workable – the control software was greatly flawed as follows, and not enjoyable to use.

THE INTERFACE: is not resizable; there is no drag and expand, so on a UHD monitor, the whole interface is quite small unless one sets the windows text settings to a larger size. That causes the text to become cut off because the interface itself does not expand to fit the text.

FAN CONTROL: NO FAN SPEED CONTROL on the interface for Floe Riing RGB drop down selection. It is only available in the Riing-Plus selection from the drop-down menus of the monitors which shouldn’t work since this is the Floe dual riing RGB – not the Riing-Plus..
Guess what? That can only be selected on monitors down lists NOT related to where the actual pump is plugged into the CPU position – monitor 1, The software balks with an error in red text stating no connected device if you change the pump/cpu monitor to anything but what it actually is. The rest of the monitors apparently do not care if some other hardware is selected instead. Crazy stuff yeah?

TEXT SIZE: None of the text on a UHD monitor is legible unless face planting the screen, or in my case using magnifying glasses, remember, The GUI is not resizable – but whatever is done to Windows resizing is mostly mirrored INSIDE the GUI frame so stuff gets cut off and overlaps. Truly I should not have to resize windows interface and resolution, etc. to make the interface usable, but if they require it of the user, then the GUI should expand to fit the required changes.

TWEAKING RESULTS: After all of the playing around and reinstalling, and playing around more, I finally managed to control the temperature better. Now I span temps in C from about 35C to 65C depending on the load.

BEFORE TWEAKING: the temperature spanned from 45C to 71C. Under a sustained load it grew roots at 71C.

THE LIGHTS: are nice on the radiator and the noise level is lower than the tower air cooler I used on my old AMD FX-8350 Black processor.

THE PUMP: Yet another big issue is the pump speed. As beautiful as it is with the RGD-LED factor, the pump speed/rpm is NOT controllable through the software or anywhere else. There is no real time data on how the pump is performing – not even rpm. I suppose they need that pump speed to stay static to fully disperse water against the fins of the water block? At a minimum, builders need to know if the rpm on the pump is correct.

INITIAL ROUND-UP :>
Does it keep the system running? Yes of course.
Is it where I think it should be for that much money? Hell no.
The software needs a total rework by someone who cares about control interfaces.
The LED’s need better flow control within the factory set patterns.
The controls need to be fully legible on a UHD screen.
There is a continuous disconnect between manufacturers for the AORUS LED controls.
Even GIGABYTE apps have disconnects between their own control software. Some apps don’t work on the new X399 chip-sets, even though they have advertised their app control center as compatible.
ASUSs AORUS controls are not compatible with any builders except those that are in partnership with them.

THE END RESULTS: I donât feel like I won the battle. I like the hardware – truly. But there is no warm and fuzzy feeling for those who adopt early. There is still much wrong with the software control from Thermaltake that I have not even touched on, such as memory loss, glitchy selection processes, and support. Thermaltake and others are already getting ready to release (or are they already released?) new AIO cooling systems so watch for those and wait to adopt if you can..

I cannot wholly support this cooler because of the initial cooling control disconnect between hardware and the software interface. I have higher expectations for that much time and money invested.

Style: Water 3.0 Red|Size: 280mm|Verified Purchase
Hello, welcome to my review of the Thermaltake Water 3.0 280 red edition. This is my first liquid cooler so I was excited to receive it. Installation was irritating for me at least but I was relieved when it was finally installed. Like I said it’s my first AIO

How I installed: I had to install the radiator in the front of the case because my case won’t allow a top installation. Usually when I see aio installed at the front the fans are on the outside and the radiator is inside so when you look into your case through your side panel you see the radiator and not the fans. I thought that there’s no reason to use cool led fans if you can’t see them so I put the fans on the inside which I believe is a pull configuration.

If you look at the images I posted the logo is upside down, which looks cool but was not intentional. If I wanted to have the logo facing the right way then the radiator hoses would have to come out of the bottom, I tried it that way but they wouldn’t reach the CPU and my video card got in the way. And so I flipped it to where the hoses come out from the top and that’s why the logo is upside down lol.

How it performs: This is what really matters. How good is this cooler? It’s awesome. It cools the cpu extremely well. Without overclocking at idle I was getting temps around 18c, my old Cryrorig H5 universal which was a great cooler would have an idle temperatures of around 28c. I stress tested the CPU using Intel Extreme Utility software I let it run for a few hours and at 100 percent load the temperatures didn’t go over 70 degrees. I then decided to overclock the CPU to 4.6 GHz in the bios my temps were hitting 25 to 38 degrees idle which is nothing to worry about.

Obviously as good as the cooler is there are other factors you need to consider such as the temperature of the room your PC is in, cable management, rpm speeds and so on. I’m very pleased with the performance of this liquid cooler, it looks really nice and was well worth the money. Thanks for reading.

Style Name: Water 3.0 RGB|Size: 280mm|Verified Purchase
Great product, the performance is great with the new AMD Ryzen 7, where I live, the ambient temperature is approximately 28Â° (centigrade) and after 15 minutes of a bench test with the CPU at 100% load the CPU temp maintain at 64.50Â° (centigrade ) is a great product that has the support for AM4, great choice for the ones that wants liquid cooling solutions.

I hope this review help other to decide. Thanks.

Style Name: Floe|Size: 360mm|Verified Purchase
Perfect to go with Thermaltake P3 build. Install was straight forward per the picture directions in box (there’s also a YouTube video that shows how to do the full install step by step). If you are using a bigger GPU, you may need to vertically mount using EZDIY riser cable. This was my first ever computer build and took an hour to install. Glad this AIO came with the AM4 bracket in the box for Ryzen 5 1600 unlike most other air/water coolers that require you to prove purchase of the fan and CPU/mobo to get an AM4 bracket.

The RGBs are bright! And the RGB on the block cooler is a nice touch too. The software is fine and does what it needs to do. Changing the RGB light color and pattern is a breeze through the application as well downloaded from the site on directions. The fans are also really quiet. I have all 3 running on performance mode all the time and on an open case I don’t hear them.

Zero issues or complaints with the water cooler.