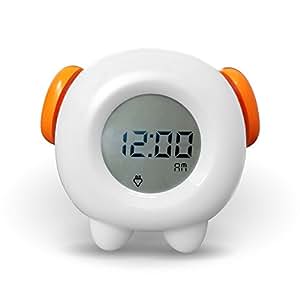 Teach Your Children to Stay in Bed

Do you want to teach your child to stay in bed in the morning and get some extra sleep? This is a wonderful early learning aid to help teach your children when it is time to get up and for parents to get some much needed rest. The cute kiddies stay in bed clock has an amazing color changing feature and although kids may not be able to tell the time, they quickly learn that when the color changes to green, they can get up.

The alarm clock for kids has been hailed as one of the best sleeping aids for children ever invented. Using proven teaching techniques, the soft, ambient tones of the nightlight help comfort kids and send children off into dreamland and when they wake up they normally nap until it changes green.

The great, fun design gives the kiddies clock a personality that they will adore and with the easy alarm settings, it is simple to use. Thereâs a nightlight and snooze button, even a nap time countdown and speaker. The kiddies personal clock comes with all the necessary features to help teach your kids a sleep routine so everyone gets a better nightâs sleep.

Not completely satisfied? Weâll make it right, no questions asked. All of our products have our 30-day return policy which means you can experience the advantages of getting more sleep for both you and your children, completely risk-free. Now you can make sure you and your children get enough sleep with this awesome clock. Click the, Add to Cart, button now and see how this early learning kids alarm clock easily teaches your child a better sleep routine.

Verified Purchase
My son absolutely loves this clock and how it can light up in his favorite color! I wish it had come with a regular plug not just a USB cable. It is easy to program.
January 17, 2018
Verified Purchase
Received and the USB cord/plug in was faulty. The slightest move would reset the clock back to 12:00. Looks to be cheaply made. Returning for a refund.
January 19, 2018
Verified Purchase
Can I just tell yâall how much I LOVE this darn clock ððð

Little back storyââ- my son turned 3 in December, and we switched him from his crib to a toddler bed. Before that, he slept 730-730. Never woke up, never cried, and in the mornings would just say âmama? Mama?â And I would go get him out of bed. But after I switched his bed, he would wake up at 4 or 5 in the morning and come lay in my bed!! I was not having that. So I looked up clocks that tell you when itâs ok to get out of bed and I found this!!

So this clock has lots of options, but how we use it is we keep one color on all night as a nightlight. So i turn it blue when he goes to bed. And then you can set whatever time you want it to tell him itâs ok to get up. So at 715, it turns green (green means go!) but it has no alarm or anything. So if he wakes up before 715, heâll see itâs still blue, and go back to sleep. If he wakes up after 715, he sees itâs green and gets up! Itâs amazing!

Verified Purchase
My wife and I were looking for something simple to help keep our 2 year old in her room until a reasonable hour and this has worked like a charm! You set it to what time you want your child to get up or “be free”, and at that time, the clock glows green. Before that time, (not sure exactly how long before-maybe an hour?) it glows red, letting them know that it is not yet time to get up, which is easily understood by my 2 year old. There have been a few nights that she gets up and comes in our room and we ask, “is your clock green?” If not, she willingly (most of the time) goes back to bed and patiently waits until it turns green and then comes in our room excitedly and says “it’s green!!” It is almost like a game and has been a God send. Funny enough, the first night we used it I explained to her that red meant stay in bed and that she could not get up until it turned green. She took this seriously because the first night I awoke to her crying and screaming “daddy, its not green,” all while standing at her door, because she knew that she should not come out until it turned. There is also a nightlite feature and a nap time feature. Overall, it is awesome and I would recommend it to anyone having a similar issue with their toddler!
January 8, 2018
Verified Purchase
This is great! I found setting it up to be somewhat confusing at first, but once I figured it out….no problems! The other thing – I set the red/orange light to be on from 5 to 6 am, and then turn green (a very early riser, my 4 year old is), and he kept waking up before 5, so there was no light on. Now it is red/orange from 4 to 5:45 am, and then green from 5:45 to 7 to cover all options! This morning, instead of coming in and asking “is it morning yet?”, he came in at 5:55 a.m. and said “It is morning – the light is green!” Thank you for this product, Marvy Brands!
January 15, 2018
Verified Purchase
This is honestly the worst product I have ever ordered. It’s most basic function (tell my child when to stay in bed) has only worked once in the last 5 days/nights. All my other issues make me wonder if it was designed by anyone who as ever interacted with a child as it was obviously not designed to be used around one. I’m hopeful it is just defective as I am going to be returning it, however it is so bad that I don’t even want a replacement.

Just for a bit of background, I read the entire manual multiple times so I made sure I was setting everything up right. I put fresh batteries in the device. I have enough technical skills to MAKE this device so I’m pretty confident I know what I’m doing.

Here is what I have found:
– Horrible settings process. The process for setting the current time, sleep time, and wake time was not well thought out. One big problem is that you have to look at the front to see what is going on while the buttons are all in the back. Not that big of a deal and I wouldn’t care if I didn’t have to do it so much…
– BIG RESET BUTTON. The reset button is exposed right with all the other controls on the back with no protection at all. It is right next to the button I ended up using the most during setup. While setting it the first time I accidentally pushed it (looking at front to set options while pushing buttons on back). It not only resets all your configurations but it wipes out the time! For a reset button it is HUGE! What happened to the kind you needed a paper clip to press? Is resetting every function so necessary that I would need to do it frequently or ever?
– Settings buttons are easily accessible by any child. This is the worst feature! My son loves his clock sitting next to his bed and naturally took a look as soon as I set it down. Within a matter of seconds he had opened the back, seen all the buttons, and managed to press the massive reset button. This requires me to go through the long setup process to get the current time, sleep time, sleep light color, wake time, wake light color all setup again.
– Rare success, mostly failures. Most days I would go up at the time it was supposed to change to green to let my son know when he could get up and the red light telling him to stay in bed was off. When the time came the light didn’t change to green. It had failed completely. I had taped the door on the back shut thus knew my son had not messed with the settings again. Instead it had just decided on its own that it was not going to work. Out of the last several days I’ve attempted to give this horrible thing a try it has only worked as intended once.
– ALARM. At any point my son can press the right “ear” button and it will endlessly beep. This is beyond annoying. The manual explains it as a feature of the alarm “snooze” saying you can snooze the alarm and “at any time” you can manually turn the alarm back on… What!? Un-snooze? I’m sorry, if I’m awake to press the button then I obviously don’t need an annoying noise to continue to try and rouse me. So I often hear the beeping coming from some where in the house where one of my children has pressed the button during the day and it continues to sound until I track it down and turn it off.

In conclusion, don’t buy it!

Verified Purchase
We struggled for a long time with a toddler who woke up regularly around 6 am. I tried several ways to keep her in bed, but finally decided to try this toddler clock. It works great. We simply explained that she can’t get out of bed until the light comes on. She now stays in bed until 7 or later. Such a blessing!
January 14, 2018
Verified Purchase
My son was so excited to get his clock. The instructions were super simple and the clock set up was a breeze! We love our purchase and recommend it!
*the time shows up when itâs time to wake, but the screen is dark when itâs not wake up time. The clock time shows during the day when you donât have the âdo not wakeâ feature on.