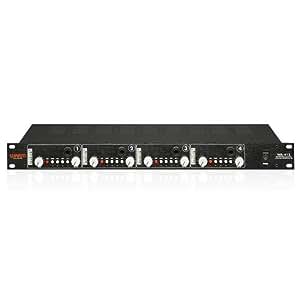 The WA-412 provides 4 channels of classic American console preamps in a sleek 1RU design. This style of preamp is often referred to as “the sound of Rock n’ Roll” for its BIG punchy low end and smooth open top end. The price/performance ratio of the WA-412 is almost unfathomable to the experienced studio engineer who has possibly paid much more for preamps of this style during their career. Featuring fully discrete socketed 6-pin opamps and custom wound Altran USA inputand output transformers, the WA-412 leaves nothing to be desired. If you are looking for multiple channels of world class tone in an affordable package, the WA-412 is the right choice for you. Hook-up Diagrams Inspiration behind the WA-412. When I first started holding regular studio sessions years ago I always desired to have more channels of high-end mic pre’s. I could only afford to have one or two in my studio at a time, which was never enough to record a full band or drummer. “I knew very well that if signals were not recorded well “on the way in”they wouldn’t be salvageable later, but my budget constrained me, so many of thesources were recorded through poor-quality mic pre’s. If the WA-412 was available back then I likely wouldn’t have had to settle for poor, low-quality tone. The WA-412 was designed “for the people” (if you will) and we believe it will become a serious work-horse in many professional and homestudios.” – Bryce Young (founder) More f

March 15, 2017
Verified Purchase
I bought this to replace a Warm Audio TB12, which is a lovely bit of gear. I figured that losing a few seldom used options (I could never hear a big difference between the nickel and steel transformers) would be minor compared to gaining three additional channels. I couldn’t be happier with my decision. This is a great preamp. It sounds at least as good as the TB12. It’s an amazing value in an incredibly useful format. Also, I’m glad to loose the power wart that came with the TB12.
July 2, 2018
I have 3 of these. Importantly, I also own an API 3124. When I bought the first WA 412, I was thinking it would probably be a fools errand, and I’d kick myself for thinking anything could run with API at this price point. But used on drum overheads and toms, it ran with the API all the way. I flipped to using it for Kick and snare, with a dual element kick mic using 2 channels, and snare head and strainer in the second 2. It equals the 3124. there are subtle differences, but it’s that good. I have an older 3124, so the output control on the WA 412 is a differentiator between the two. To be able to push input to breakup and throttle back the output so I don’t crush my converters is a nice thing. On vocals, guitars, bass, it is just big and present and wonderful. Like an API 312.

I’m just going to throw this down- I may sell the API so I can try some of Warm’s 1073-style pre’s, and maybe a TB-12. Because 4 channels of the API was MORE than 12 channels of Warm Audio’s. If you need a good, versatile pre for your studio, this should be on your short list.