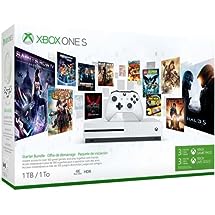 Own the Xbox One S Starter Bundle (1TB), and dive into the very BEST of Xbox One. Get instant access to over 100 great games with 3 months of Xbox game Pass. Enjoy an expansive catalog of games carefully curated for high quality and fun gameplay, including fan favorites such as Halo 5: Guardians, Dirt Rally, and LEGO Batman. Games are added every month so there’s always something new to play. Play with and against friends around the world with 3 months of Xbox live Gold, plus receive exclusive membership perks like free games each month and deep store discounts on Xbox One. This bundle Includes the Xbox One S Console with built-in 4K Ultra HD Blu-ray, 4K video streaming, high dynamic range, Premium audio, and an Xbox wireless Controller. With over 1, 300 great games including today’s blockbusters, 200 Console exclusives, and 400 Xbox classics, there’s never been a better time to game with Xbox One.

June 2, 2018
Edition: S 1TB – Starter Bundle|Verified Purchase
Awesome build love the quality and compact look of the slim and how it has the built in power brick great product Xbox forever.